Envision is a slate running candidates for all positions in the 2018 UVSS Election. 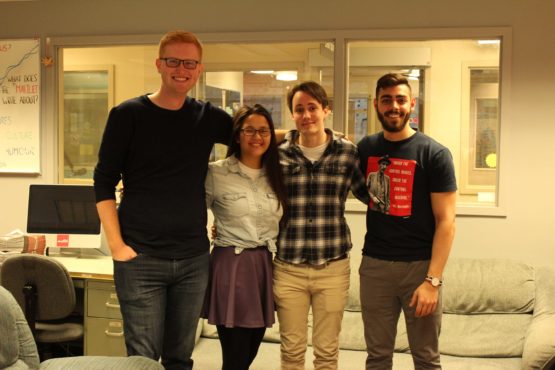 Candidates for the Envision Slate:

Ainsley Kerr Director of campaigns and community relations (not pictured)

What are the three most important aspects of your campaign platform?

Lee: It’s really about getting student engagement up a lot. I know for Noor specifically there’s a lot of ideas for concerts and stuff to really get the UVic community together. We also care a lot about mental health, because I think that affects every single one of us in this room, in some aspect or another. And just making sure we have resources available at all times on campus and just advocacy as well for students and their needs.

What did last year’s board do well and what did they do poorly?

Chasib: We had our controversies. Of course there’s interpersonal conflicts that happen in a workplace, that happens everywhere — it’s not just an us thing — but we’ve been really good, I think, with dealing with that issue or with those issues when they come up. It’s really in our best interest to be working well together with every part of the UVSS and every group here cause if we don’t then it makes our jobs a hell of a lot harder. Then we start dealing with all these issues, I have to worry about all this extra drama, I lose focus, and I lose sight of what I’m really here to do. So it’s in our best interest to be working well with everyone.

What compelled you to run in this election?

What is the biggest issue students on campus face, and how would you address it if elected?

Angelblazer: Number one would be affordability. If you look at it, the housing crisis obviously affects students a lot. Fees always go up at a minimum of two per cent a year and then parking is getting more expensive.As far as affordability, what we are trying to do is very much to focus on what levers do we have that we are able to pull to make life cheaper for students.

Angelblazer: There’s more about student engagement. So it’s also about democratic participation as well, and not just UVSS governance. It’s one thing to get quorum at AGM, it’s one thing to get quorum at SAGM, to get more people voting, but it’s also about getting students involved in sort of more local politics and sort of getting them to vote in the upcoming municipal election and the proportional representation referendum as well any of the referenda that the UVSS may run in the future.

Are you concerned about the lack of candidates in this election?

Whittla: We weren’t expecting that.

Lee: And we’re a little, I don’t know if disappointed is the right word, but I mean it’s never great to see that people don’t want to be involved in elections. We want people to be running that have a lot of passion for how to make things better because of course we don’t have all the answers.

Chasib: I’m not gonna say it’s not a nice thing to have no one running against us. But it would be nice to have some people run against us. So we can always stay on our toes, because we don’t want to be complacent.

Last year’s election saw a small voter turnout. How do you intend to raise student participation?

Chasib: One of the biggest things was if you heard about the AVP referendum. That, that had a  21 per cent voter turnout. That was huge. But that was also because of how how often they were out there, talking to people getting people in the know and just talking to them ‘We’ve got this referendum coming up.’ So that going to be huge for us. We’ve got to be really out there.

Angelblazer: Well thankfully also there are a few structural changes that it is going to increase voter turnout. This year, we have roaming voter information officers who are basically are going to walk around with iPads and say, ‘have you voted yet?’

What should the main job of the UVSS be?

Angelblazer: The board always tries [to] focus on providing better services for students or we focus on advocacy for students. So as a board, I’d say that what we’ve been doing this past year, and what I want to do a lot more going forward, is to try to balance the two. Instead of saying, ‘oh, education is a right and that’s all we’re going to be doing for time immemorial,’ it’s like saying, ‘hey, we want to provide better healthcare, a better health and dental plan with more options, we want to be able to provide better services to clubs, and things like that.

Chasib: To dumb it down — be all-around better.

Do slates provide a net benefit?

Angelblazer: I mean we could get rid of slates tomorrow. Honestly, I wrote the policy. But I’d say that what slates bring to the table is they make it easier for students to actually know and engage with the election and to actually understand what’s going on. If we wanted — a lot of people talk about trying to get rid of slates, sort of reform that whole section — but first if we wanted to do that we’d have to reform our governance structure.

Lee: And that’s something we’re definitely open to looking at next year, if we win, and just seeing what students think about, because I know there’s a lot of dislike towards slates because they can create sort of a hostile environment.

What do you think is important for students to know about your campaign and the upcoming elections?

Lee: Get involved! Vote! It doesn’t matter who you’re voting for, just get out there, these are your student fees, this is your student union. Have a say in what’s going on.

This interview has been edited for clarity and length.