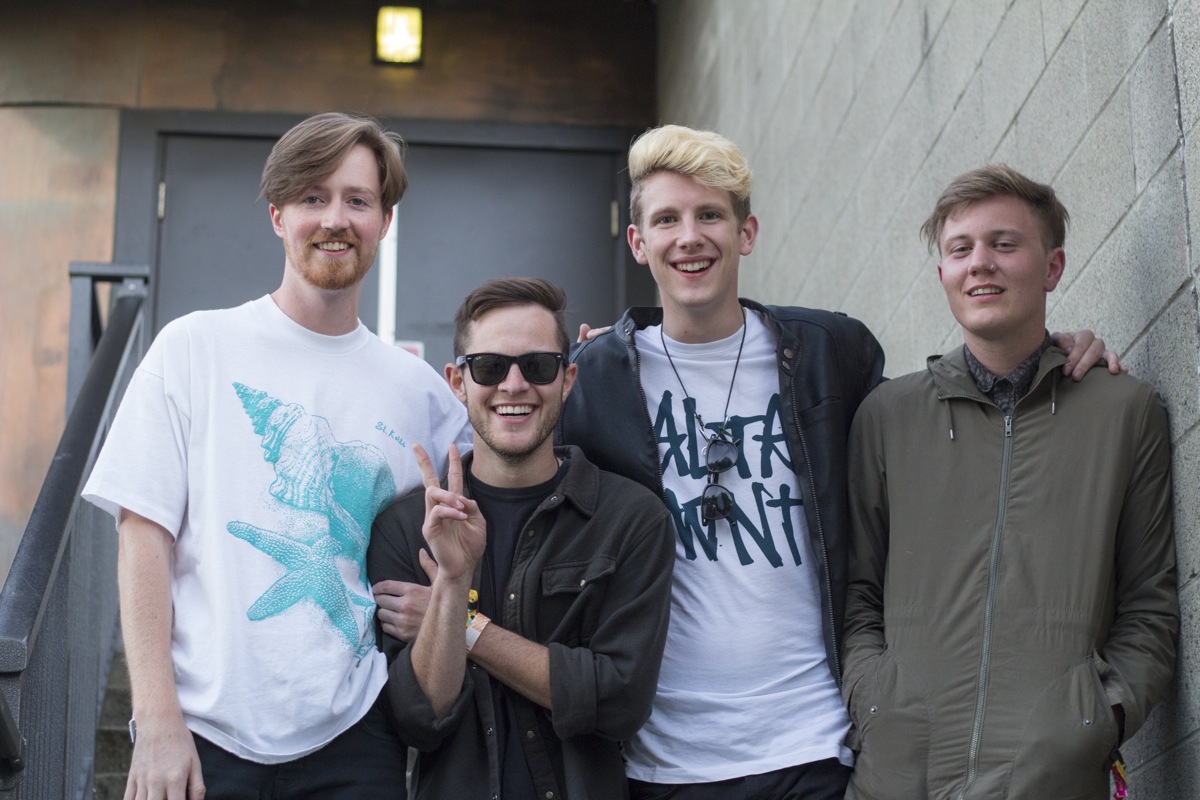 Lounging on the stone steps of Copper Owl, waiting to play their next gig, Vancouver-based Little Wild bring an air of mystery to the music scene of Victoria, as one of Rifflandia weekend’s opening acts. This marks their first trip to Victoria as a band.

Victories, their first full-length LP, was released on CD and vinyl through Neptoon Records Vancouver on Nov. 26, 2013. Up until that point, their only released material took form on less-than-impressive EPs, according to Holmes. “We have a better understanding of who we’re trying to be,” he said.

“We take a lot of influence from garage-rock—but what does that even mean anymore?” said Zack. Their newer material has been influenced by The Vines, the Rolling Stones, and The Strokes. “Straight-up rock bands,” he said. Erickson admits that even before the band’s creation, music was the “missing puzzle” piece that brought them all together.

The band’s ideal goal is to “have fun and play good music. We’re trying to just do our thing and play what we enjoy,” Layton said. But their ideals do not come without obstacles.

Little Wild’s biggest touring opportunity took form as a month-long trip down the West Coast, including a gig at SXSW. Their van broke down shortly out of Portland, leaving them stranded on their way to the next show.

“It’s super easy to look at obstacles and be like yeah, fuck it, I’m going to get a full-time job,” Zack said. “But I think if you want things bad enough, you’ll get them, one way or the other.”

On the verge of abandoning their tour, they managed to find a quick fix for their van and arrived in San Francisco 10 minutes prior to their stage appearance.

“The key to music is perseverance—even before talent. If you’re not persevering as an artist, with your eye set on something, there’s no point in doing it,” he said.

Victories presents their audiences with a vastly different sound from track to track. From tropical vibes in “Cockatiel,” to massive riffage in the heavy rock song “Great Big,” to lyricless songs like “Ride Off . . . Real Dramatic Like.”

The distortion pedals that drive the album’s melodies are impossible to recreate on-stage without the same in-studio equipment, presenting Zack with a learning curve as a guitarist. They have begun eliminating these aspects of their recording process in their new material and relying more on natural sonic guitar tones.

“I can’t speak for anyone else who listens to the record, but I wouldn’t be able to make sense of it if I had listened by itself front-to-back,” Zack said. “I would have to hear it live. When we play live, we bring a lot of energy to the table.”

Their live performances are promised to be unconventional. Layton’s background in theatre brings a unique perspective. “The unpredictable side of not knowing what might happen keeps me itching for what will happen by the end.” said Holmes. According to the band, they have broken piñatas and gear, and even started conga lines.

“It’s supposed to be fun when you’re playing the show and doing your thing, but if you’re gonna do it you’ve gotta do it right,” Layton said. “You can’t be fucking around—that leads to a band breaking up, or friendships going awry. It’s important to be responsible as friends, bandmates, and artists.”

“There is a bit of seriousness involved, but at the same time we’re all a bunch of shitheads,” he said.

Correction: A previously-published version of the article named Josh Erickson as the band’s newest bass player. In fact, their new bass player is Mitch Trainer. The article has been amended to reflect this.