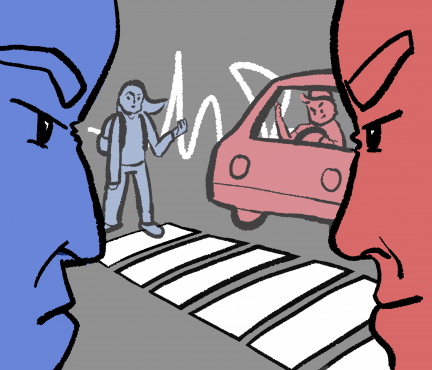 Monday saw a record number of angry Victoria residents at this past City Council meeting. Reflective vests, bright spandex, and cycling helmets turned the dreary hall into a sparkling sea of furious cyclists. Each and every one of them there for the same reason: to protest the installation of several new “pedestrian lanes” — chunks of cement that are separated from the roadway by means of a risen platform — and the repair of existing pedestrian lanes.

The Martlet was in attendance for the meeting, and while Council was taking recess, asked for some concerned citizens’ opinions on the proposed initiative to increase the popularity of on-leg transport. Here’s what they had to say:

“Disgraceful! Why do we need two-way pedestrian lanes on one-way streets? It’s so confusing for me. I think that you should only have one-way corridors. That’s the only thing that makes sense. Cyclists will be so confused if they’re riding down a one-way street and see someone walking in the opposite direction! Be logical, people!” — Dick Van Bike, 41

“I wish we had been consulted for this project. I know that Helps spoke to a number of experts, residents, commuters, and drivers before making a decision, but I’m upset that she didn’t consult me personally before she made this decision.” — Mike Enbike, 55

“My name is Christopher Sidewalken, and I’m actually here to say that I’m a big fan of the pedestrian lanes.”

“We already have a place for pedestrians. It’s called the home! If they want to go outside the house they should get on a bike, bus, or car and rough it like everyone else. They can’t expect a whole lane for themselves. Downtown traffic is bad enough without throwing another lane into the mix.” — Edna Cycleen, 32

“My name is Christopher Sidewalken, and I’m actually here to say that I’m a big fan of the pedestrian lanes. The ones installed around the city make it a lot easier for me to get to work and back without being hit by a car. I hope Helps keeps up the great work, and — ”

Unfortunately, this comment was overheard by the cyclists who were present at the Council meeting, and Sidewalken was abruptly cut off by a barrage of airborne cycling cleats and squeeze water bottles. He quickly fled City Hall with a gang of bikers on his heels. Biker gang? Bike gang? A gang on bikes.