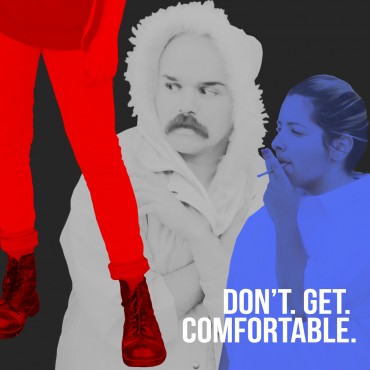 This is a review of Art of the Eight Limbs. Check out our preview, published Aug. 23, for more on the play’s production.

Art of the Eight Limbs, part of the Victoria Fringe Theatre Festival, opened at the Roxy Theatre on Friday to an enthusiastic audience. As part of its monologue structure, the cast of three rotate across the stage to recite their own story, and three narratives build with increasing tension into one.

The characters remain unnamed onstage, but are referred to in the show credits as White, Blue, and Red: White (Alex Judd), so-called because of a uniform of white shawl and dressing gown, is a charmingly eccentric agoraphobe with several obsessive preoccupations; Arielle Permack gives a chilling performance as Blue, a rough-on-the-outside chain smoker haunted by his past; and Red (Lucy Sharples) rounds out the trio as a spirited and resentful teen navigating a new foster family. Playwright Kat Taddei’s skill is apparent in the unique and stirring voices that bring each character to life.

The show is a study in character development, with each round of monologues delving into more complex and dark territory. Taddei and director Chase Hiebert explore a spectrum of broken relationships and the consequences they have; Blue in particular inspires revulsion at times, but, along with the other two characters, also touches on a deep sadness.

One compelling aspect of the play is its commitment to gender neutrality. Red and White are written as gender-neutral characters, and the script avoids making gendered references to them: proof that gender doesn’t need to be ever-present. With Permack in the male role of Blue, and romantic and sexual relationships developing between characters of all genders, gender and sexuality become confused and ambiguous. Art of the Eight Limbs is a strong story that provokes thought around contemporary social issues, without being politically driven. It feels wholly — and refreshingly — current to how many people live their lives.

At about the halfway point of Art of the Eight Limbs, it clicked: the link that joins the show’s three narratives into one. Figuring out the puzzle of connections between characters is the fun of the show, and once I had that ultimate moment of revelation, everything fell into place, and it strikes just the right balance of surprising and inevitable.

Despite the basis in monologue, visual elements contribute equally. Costumes by Delaney Tesch serve as important visual codes, and add specific details that makes the characters engaging: White’s slippers provide a touch of humour, while Red’s non-descript jeans and hoodie reflect their feelings of being unremarkable. The soundscape of film noir-ish music, designed by Zoe Wessler, sets the tone nicely.

Art of the Eight Limbs is polished, clever and challenging. Fall asleep for ten seconds and you’ll miss something. Don’t worry, though: there’s no way you’ll fall asleep.

Art of the Eight Limbs plays at the Roxy Theatre tonight and Sept. 4. Visit intrepidtheatre.com for show times and details.