Victoria Fringe 2016: Puppets get personal in ‘Does Not Play Well With Others’ 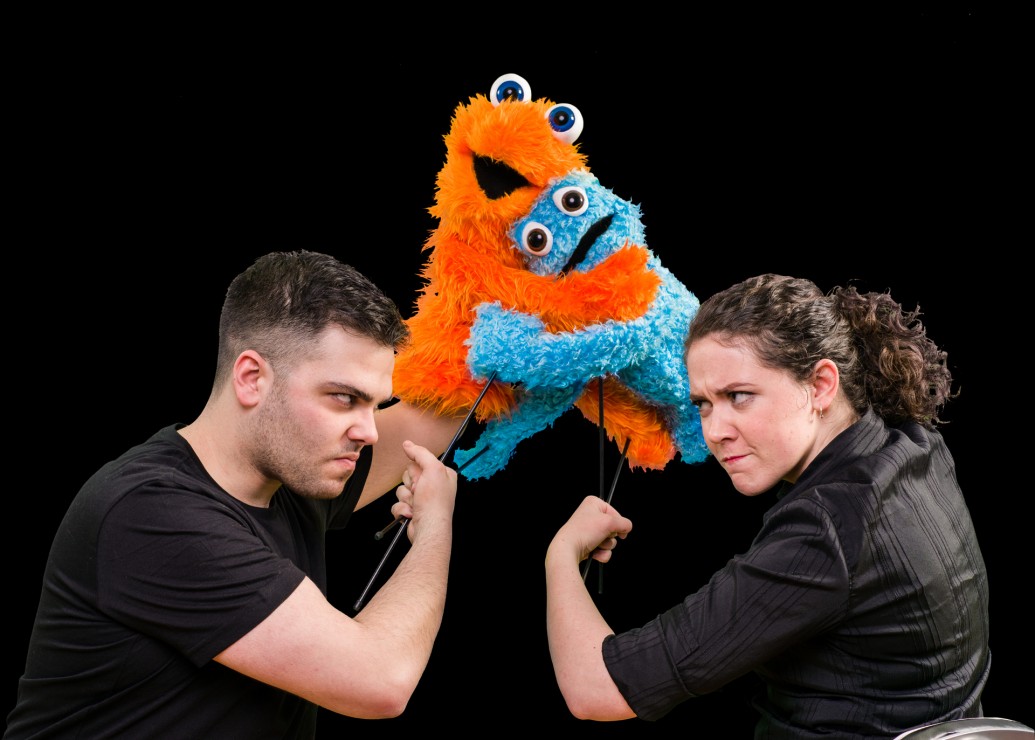 What do the lives of children’s puppeteers look like when they step off stage? It’s a question Toronto-based puppeteers and performers Kira Hall and Adam Francis Proulx examine in Does Not Play Well With Others, which opens tonight at the Victoria Fringe Theatre Festival.

Does Not Play Well With Others, directed by Andrew G. Young, centres on two television puppeteers whose coworker embroils the network in a scandal. In its wake, the two puppeteers, played by Hall and Proulx, face increased pressure from the network while simultaneously dealing with each other and their own idiosyncrasies.

“We were interested in children’s performance and the dichotomy between the squeaky clean, kid-friendly nature of puppetry, which is also how a lot of people perceive puppets, and some of the attitudes and actions that can happen behind the screens,” said Hall.

“There’s a public expectation that the performers themselves, as people, be these perfect, clean kinds of folks who never step out of line,” she continued. “There’s a tendency once the cameras are off or once we’re offstage to let loose and shake off a little bit of that tidiness.” Does Not Play Well With Others takes all of this into account.

Hall and Proulx met working on a Toronto production of Avenue Q in 2012 and have both worked frequently as puppeteers since then: Proulx’s show Baker’s Dozen: 12 Angry Puppets won Pick of the Vancouver Fringe in 2015; Hall’s first foray at the Victoria Fringe, Paleoncology, won Favourite Drama in 2014. The latter used object puppetry, a type of puppetry in which the performer moves objects by picking them up. Mouth puppetry, popular in Sesame Street and the kind used for this show, involves puppets that the performers wear on their hands.

Hall, who attended the Canadian College of Performing Arts here in Victoria, is excited to be back in town. She said Does Not Play Well With Others is a dark, sharp comedy: Death to Smoochy meets Bert and Ernie as viewed through the lens of 30 Rock.

The writing process began last fall, and the two-person, two-puppet show premiered at the Montreal Fringe in June. “People loved the puppets,” which Proulx built himself, said Hall. They look a bit like orange and blue Elmos, and are, without a doubt, adorable when brought to life by the puppeteers.

The show describes itself as half children’s television show, half adult tragicomedy. Among the more serious themes, it addresses the heightened mental health issues present in performers and other members of the entertainment industry, something several recent high-profile suicides and overdoses have shed light on, and that Hall and Proulx have seen their contemporaries struggle with and work through.

“It’s an issue that can be under-discussed or romanticized in our industry,” said Hall. “You know, the tortured artist thing. We wanted to look at it through a different lens.”

Hall is conscious of the very thing her show addresses — the walls performers put up in self-defense — and she’s heading into Victoria Fringe with vulnerability on her mind.

“[A] character has to have some vulnerability to let the audience in and have them connect and care,” she said. “Striking that balance between the character’s innate guardedness and letting the audience see their weak side is always a fun challenge.”

As for the show’s title? “We’re creative people,” said Hall. “We have to play well with others because it’s our job, but some days it’s harder than others.”

Does Not Play Well With Others plays at the Metro Studio Theatre Aug. 25–27, 30 and Sept. 1 and 3. Visit intrepidtheatre.com for showtimes and details.