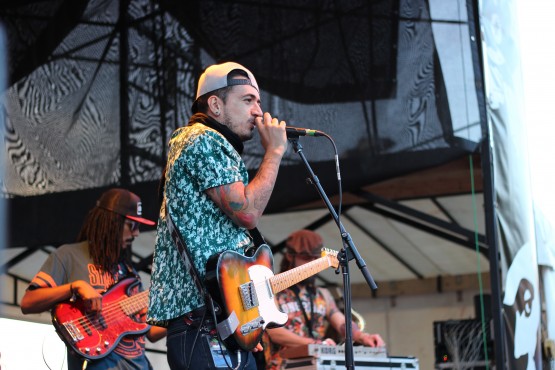 On the third night of the 15th annual Victoria Ska Fest, there was a moment that crystallized and reflected everything I’ve come to love about the festival. Ska legend Lynval Golding – supported by one of the finest live acts in music today, the Aggrolites (whose leader, Jesse Wagner, was in fine spirits despite being hobbled by a cast on his left leg) – launched into “A Message to You, Rudy,” a song he popularized with the Specials in the ‘70s. The crowd started singing en masse, regardless of age, style, or colour. It was a perfect representation of the collaborative, community-oriented spirit that has come to define the Victoria Ska Fest, the longest running festival of its kind in North America.

Once again, for five days, the downtown core of Victoria became a beating heart of reggae, ska, funk, and everything else tangentially related. People were happy; drinkers were in control. Well-dressed older people bobbed their heads next to skanking punks. Children ran free and people danced barefoot in puddles. Twice, the sky ceased its rain and allowed the sun to peek through for the evening’s headliners: the the Aggrolites/Lynval Golding combo on Thursday and the double-bill of Fishbone and Barrington Levy on Friday. Shockingly, it was the first time that the latter pairing had shared a bill. Hell, they’d never even met before that night! All those elements came together for one of the festival’s  most memorable years yet. Here’s what stuck out most for me at this momentous Ska Fest.

The international appeal of reggae music

I am consistently surprised at the quality of reggae music that now comes from all over the world, not just the tiny island of Jamaica. This year’s festival was a true display of the international appeal of reggae music, with three bands highlighting that broad spectrum. Zvuloon Dub System repped far-away Israel and lived up to their name playing some immense dub rhythms, dubbed “Ethio-dub” by their charismatic frontman, Gili Yalo. Providencia brought the pure, uncut roots reggae straight out of Colombia. When I saw Provedencia singer Camilo Moreno in the crowd later in the week getting yelled at by a dance-enthusiast for checking his cellphone at what she deemed an inappropriate time (WRONG), I took the opportunity to point out that I loved his band. When I shook his hand, he pulled me close for a hug. Finally, Los Rastarillos, a group of Mexican Rastas from the plateaus of Mexico,  that routinely brings back their touring earnings to share with their community. All three brought a great lightness and warmth to my heart, as great reggae tends to do.

The Victoria Ska Society, its leader Dane, and all the volunteers

Volunteers are a necessity for any festival, but there’s something extra-special about the small group of people that you see year in and year out. It’s a real community atmosphere with the volunteers all smiling and dancing through the crowd as the music bumps. It all starts with their fearless leader, the incomparable Dane Roberts. Much has been said about the origins of Ska Fest being started by Roberts as a UVic project but even more pleasant is the fact that even after 15 years, you can still see the festival founder dancing harder than anyone else in the crowd. I cannot commend Dane and his cadre of volunteers (collectively known as the SKAfia) enough for helping to bring good music to Victoria all year long, especially at Ska Fest.

I met this cat on the last night after seeing him all week at the front of the stage, losing his mind and pumping his fists in the air. We traded war stories from past concert experiences and he told me that he made his way to Ska Fest by way of a 36 hour bus ride from his home in Saskatoon. This might be the most extreme example I’ve come across yet, but this is the kind of dedication I’ve come to expect from the music lovers I meet here year in and year out. (Shane, if you see this and I got your name wrong, I’m sorry. You’re a soft talker and years of concert-going has gifted me with low-grade tinnitus!)