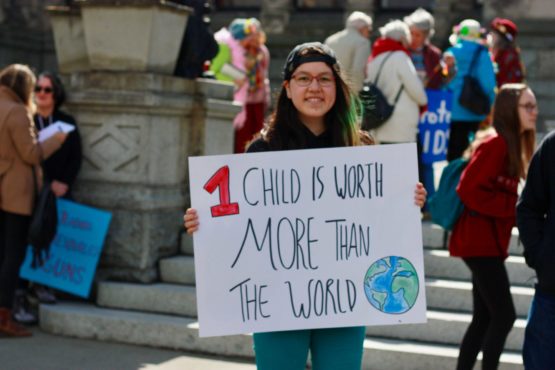 On March 24, high school students in the United States led hundreds of thousands of people across the country in marches and rallies to protest gun violence following the deadly shooting at Marjory Stoneman Douglas High School in Parkland, Fla.

These demonstrations extended beyond national borders when students from Esquimalt High School’s Youth Political Commons (YPC) organization held a rally in solidarity with March for Our Lives in front of the B.C. Legislature in Victoria.

The event attracted a crowd of approximately 250 people, many of whom were holding an impressive array of protest signs including “Schools are for learning NOT lockdowns,” “School zones NOT war zones,” and “Books NOT Bullets.”

Talking to the participants and listening to the speakers made it clear why holding a March for Our Lives rally in Canada is important despite its American origins.

Fiona went on to explain that she’s recently had a nightmare about a lockdown that terrified her because of how real it felt. “We shouldn’t be scared to go to school,” she continued. 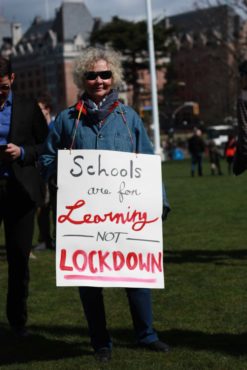 Rally organizer and founder and co-president of YPC Magritte Gordaneer echoed these feelings when she stepped up to the podium as the first speaker of the day.

“We are standing up in solidarity with our family and friends across the border saying ‘we want change,’” Gordaneer said to a cheering crowd.

“Canada and the U.S. are like trees that have grown close together for hundreds of years. On the surface we are two separate nations, but under the earth our roots are woven together,” she continued.

During her speech, Gordaneer explained that her own high school in Victoria went through a lockdown last fall, and that everyone she was with thought it was a school shooting. “No one should have to fear being next,” she said.

In fact, full lockdown drills are a common experience for students in Victoria from the moment they start kindergarten. During the drills, students and teachers turn off the lights, shut the doors, and hide in closets or sit on the floor in the corner of a room.

His words were almost drowned out completely by the cheers.

In total, nine speakers and groups came on stage after Gordaneer, and all of them mentioned how inspired they felt seeing Victoria youths’ political engagement.

Taking a step back from the specific issue of gun control, speakers also touched on the importance of reshaping dominant constructions of masculinity and on the need to demilitarize the planet more generally.

“Arms are for embracing,” chanted the crowd. 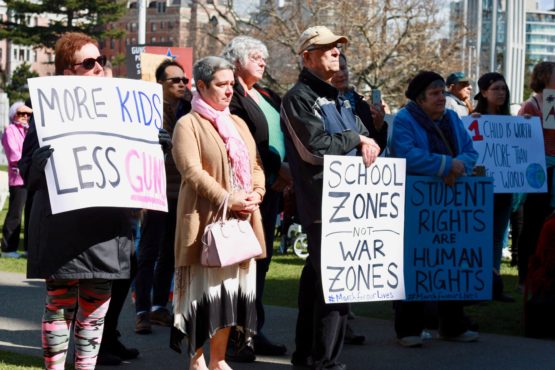