Victoria to participate in global student strike for the climate 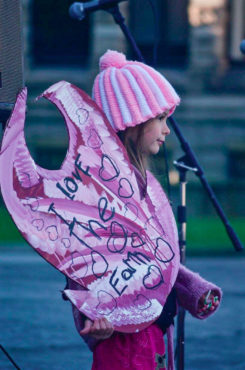 On Friday, Mar. 15, pages of tests and textbooks will be left unturned as local youth from across the Greater Victoria area leave their desks and head to the B.C. Legislature to participate in a global student strike for the climate.

The action is part of a world-wide movement inspired by 16-year-old Swedish youth activist Greta Thunberg, who headed the first student climate strike and camp-out outside the Swedish parliament in August 2018.

In September, Thunberg began leading recurring student strikes every Friday, and urged other youth to do the same. Thunberg’s initiative caught like the wildfires that have been ravaging B.C. in recent years.

15-year-old Finn Kreischer is one Victoria resident who followed Thunberg’s lead. He has been helping lead student strikes at the B.C. Legislature on the first Friday of every month, and he’s also been involved in organizing the Mar. 15 action, where he will be featured as a youth speaker.

“We are the first generation to experience the impacts of climate change and the last generation who will be able to do anything about it,” he said.

Concurrent demonstrations are expected to happen on Mar. 15 in hundreds of communities across the world. According to registration counts from FridaysForFuture.org, which is the network hub for the student climate strike movement, there are over 1000 actions planned in 89 different countries, at the time of writing.

“Youth all over the world are rising in the millions to demand the world’s nations protect our future, our Earth home, and the web of life that sustains us all,” reads the Facebook event page, which is hosted by civil action groups Our Earth, Our Future; YouthForClimateCa; Rise and Resist; Extinction Rebellion Vancouver Island; and Social Environmental Alliance.

“With our collective energy, the intention of this strike is to actively embody the vision … for a safe, equitable, and sustainable future for all.”

At time of writing, the Victoria event page had 640 interested and 200 confirmed as attending.

The Greater Victoria Teachers’ Association (GVTA) announced on Thursday, Mar. 7 that they were in support of the strike and would be sending representatives to attend the event.

“Our union has voted to officially support the strike on [Mar.] 15. To that end, we will be releasing from work a teacher from each of the seven high schools, as well as a number of members of our executive committee, to be there,” said GVTA President Tara Ehrcke.

Youth and international speakers, as well as folk-activist musician Luke Wallace, will be opening the event at the Legislature beginning at 12 p.m. Students will then take to the streets at 1 p.m. to block traffic at Fort and Douglas Street, where many of Canada’s big banks, which continue to invest in fossil fuels, are located.

Organizers of the action say the youth will be calling for major Canadian banks to divest from all new fossil fuel infrastructure. Their demands will also be directed at the federal and provincial governments, which they say should halt any new fossil fuel projects, as well as place an immediate ban on logging old growth forests to preserve their critical role as carbon sinks.

The youth participants plan to demonstrate their rejection of status quo politics which are creating the shaky future they will ultimately have to live with.

“With our collective energy, the intention of this strike is to actively embody the vision … for a safe, equitable, and sustainable future for all,” said UVic student organizer Antonia Paquin.

The action is open to youth as well as supporting adults and elders.

“We invite everyone of all ages to stand with us! Each individual voice is greatly needed,” reads the Facebook event page. “Please craft banners that reflect what you love most about nature and about what you envision for a beautiful, sustainable world. This is a celebration of what we love most!”

For more information on Victoria’s strike for the climate, please visit the Facebook event here.

This article was updated on March 14 at 4:32 p.m. to correctly reflect Finn Kreischer’s age.