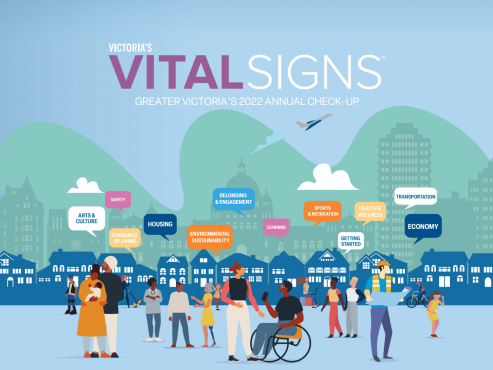 Graphic sourced from The Victoria Foundation.

There are many factors that create a healthy and prosperous community. While understanding these factors may be complex, identifying community member satisfaction is a good place to start. That’s exactly what the Victoria Foundation Vital Signs report has been doing for the past 17 years. The report documents residents’ ratings on 12 key issues such as housing, environmental sustainability, and safety.

Victoria’s Vital Signs report is based on the United Nations’ Sustainable Development Goals which were launched in 2015 after three years of collaboration with over 190 countries. According to the report, their unified vision allows Victoria to “focus and coordinate collective efforts to address problems beyond the community scale, such as climate change, poverty, and inequality.”

This year’s report confirmed the decreased satisfaction that has been steadily building in Victoria’s housing market. The issues that were most important to residents were housing and cost of living, with respondents putting both within their top five issues 69 per cent of the time.

Housing received an F, the first time any area had been given a failing grade by the community. Moreover, only eight per cent of residents who responded to the survey gave housing a grade of B or higher, marking the second time this has happened in the past 10 years. This dissatisfaction isn’t entirely out of the blue, however, as housing has been the lowest rated category since 2013.

The report’s sustainable development goal for housing is access to adequate, safe, and affordable housing for all. The report noted that the failing grade in housing can in large part be attributed to the rise of rental prices and the accompanying fall in rental vacancies. Students appear to be directly affected, as the majority of respondents who believe that Victoria should do more to provide affordable housing and rental opportunities were under the age of 30. The report concluded that Victoria would need to more than double its output of units to successfully restore affordability by 2030.

Katie Blake, who is the executive director of the Habitat Acquisition Trust, a group that works in the region to protect the local environment, says that Victoria’s environment along with its climate, parks, air quality, and walkability is one of the “best things” about the city. Blake says the fact that Victoria’s water supply comes from a protected watershed which is “filtered by natural forests and natural landscapes” is something that many other cities can only wish for.

As Victoria continues to expand, Blake says that waste management will be a major issue for the future. She encourages people to take the tour at the Hartland Landfill Facility to fully understand what happens to our waste.

This is in line with some of the sustainable development goals for environmental sustainability, such as increasing water efficiency and ensuring a sustainable water supply, as well as reducing waste management through prevention, reduction, and recycling.

One of the surprising findings from Victoria’s Vital Signs report were the statistics on extreme heat events. 619 people died in 2021 due to heat-related causes in B.C. — the majority being older adults who lived alone. A correlation was also found between the lack of adequate cooling systems available to low-income neighbourhoods. The recommendations made by the report to address the issue of extreme heat included implementing warning systems, long-term heat-risk mitigation, and extreme heat prevention, especially for vulnerable populations.