Victorians kept these local businesses alive during the pandemic

Despite cruise ships docking in Victoria, it’s the locals that have kept these businesses busy 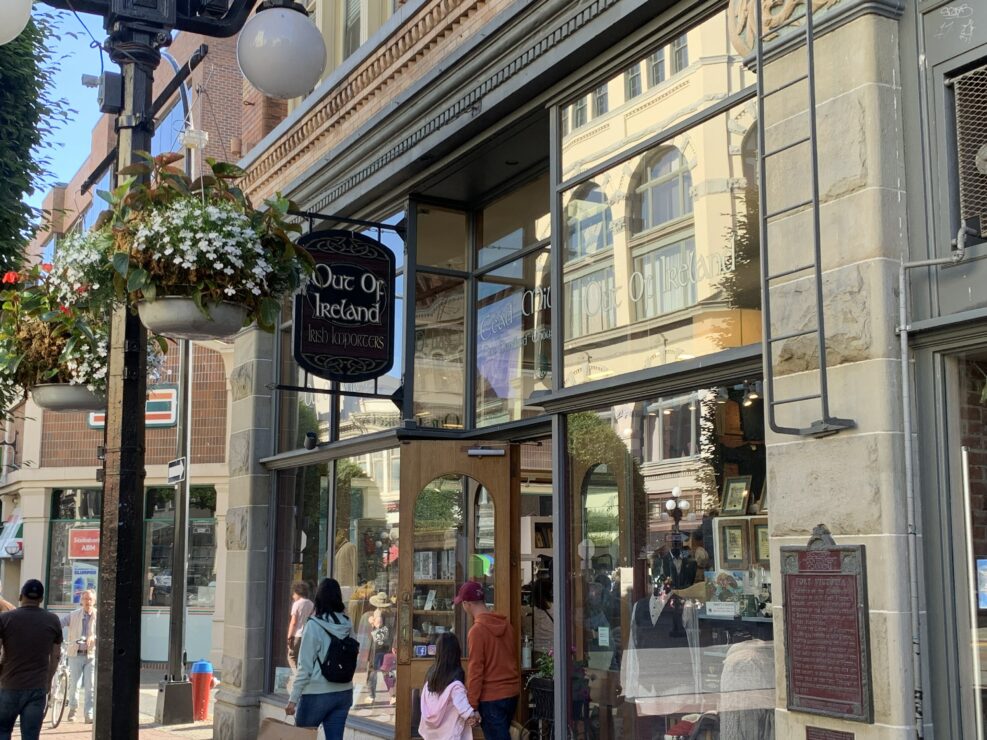 Students know it as well as anyone — the COVID-19 pandemic has been extremely difficult. Our lives were put on pause, and we have continually gone in and out of lockdowns and restrictions. These lockdowns have occurred in all segments of society, and that includes local businesses.

Local Victoria businesses have dealt with a complete halt to tourism in the city, and constant strains on their operations throughout the lockdowns. There have been several times in the last couple of years that we all anticipated a return to some sort of normal.

Last year, even with COVID-19 vaccines being available, there were no certainties about how much of a return would happen. In July 2021, the CBC reported that B.C. businesses were warily optimistic about reopening. The talk was all about how businesses had taken a hit, but there was hope that consumerism would rise.

After another long year of pandemic life, there are now few restrictions in place and the first cruise ship in two years docked in Victoria in April 2022. Since then, there has been a full schedule of cruise ships coming in and out of Victoria.

The Martlet wanted to find out if the new influx of tourists has brought the same pre-pandemic prosperity to local businesses. Two Victoria businesses spoke to the Martlet about the pandemic, local engagement, and the cruise ships docking in the city.

Out of Ireland: Irish Importers

Theresa Palmer owns Out of Ireland with her husband Perry Foster. Their store has been on the corner of Government Street and Broughton Street for over 20 years. The store imports a variety of Irish goods such as jewelry, clothing, and other gifts.

Palmer told the Martlet that the store opened shortly after 9/11, when tourism and travel plummeted, and that the store also survived the 2008 financial crisis. However, the COVID-19 pandemic was a particularly hard hit for the business.

“Well, [the pandemic] was dreadful … By the middle of March, we were closed. Right on St. Patrick’s Day, which is actually a busy day in the store,” Palmer said. “All our staff were laid off, and the store was shut.”

The store was able to slowly start opening in the middle of May, and Palmer said the store was back to regular hours by the end of June 2020, however it was “certainly not normal business.” Below-normal business levels continued until 2021.

“We didn’t get back to any kind of normal until September of last year,” Palmer said. “And since then we have actually been very busy … Last Christmas was our busiest Christmas ever in the store.”

“First of all, we’re hearing that the boats are not coming filled to capacity, so that’s one thing,” Palmer said. “And we’ve had very cool weather this spring too and a lot of evenings when the boats are coming in there, people aren’t getting off.”

Palmer also told the Martlet about a decision by city council that has had a significant impact on the amount of cruise passengers coming into the store — one that she says many business owners don’t support.

Black Press Media reported that several local businesses expressed their concerns with a stop at Government and Yates due to how disconnected it is with the core of the Government Street businesses.

Despite concerns, that vote in early Feb. 2022 ended with keeping the closure of Government Street and the stop at Government and Yates. Cruise shuttles now go up Blanshard and don’t go past the Inner Harbour, the Empress, or the Legislature until the way back to the ships.

This decision has not been ideal for businesses like Palmer’s because of the area in which tourists are dropped off.

“We’re not getting those buses … on this lower third of the street which would normally be traditional tourism shopping,” Palmer said.

Despite the lack of cruise passengers shopping at the store, Palmer’s business remains busy. The answer to why lies in domestic tourism.

“The one thing to counter all of that is that we are definitely getting a lot more Canadians from other parts of Canada who are staying within [the country] and shopping,” Palmer said. “So that’s super. And that kind of balances out and is making up for … the loss of cruise business for us.” 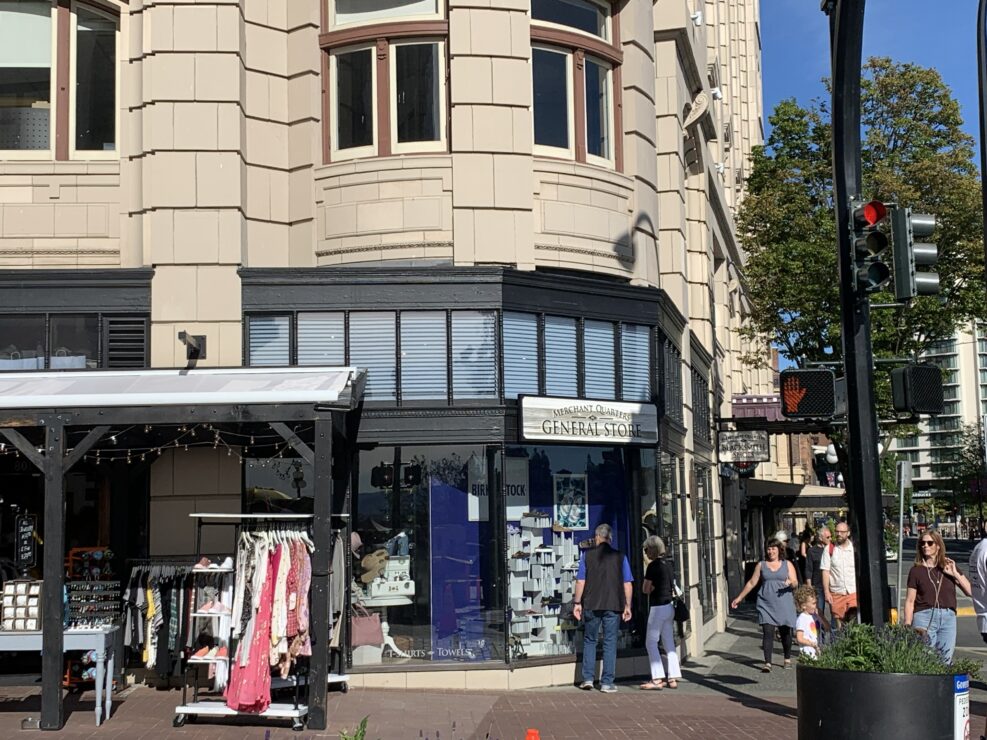 The Martlet also had a chance to chat with Karen Fyall, the general manager (GM) at Merchant Quarters General Store. Fyall has been the GM at the store since it first opened its doors on March 12, 2020, only days before the entire country would be shut down due to the pandemic. Fyall told the Martlet that on March 17, only five days after the grand opening, the store had to be shut down until May.

When it first opened, Fyall told the Martlet that the whole store was ready for the 2020 tourist season. When it was required to close, the owners and management had to figure out how to change the store to fit the unprecedented situation.

“[The owner’s] vision was a modern take on a general store … there [were] so many beautiful [products] and then when we had to close,” Fyall said, “we were like ‘Okay, we have to pivot here.’”

According to Fyall, pivoting meant finding a way to reopen with essential service status while also keeping the staff in a safe working environment. The general store was able to have essential status because they sold food from local artisans from the Island and Gulf Islands. Fyall told the Martlet that at first, the store was more of a grocery market mixed with a general store.

The store now holds larger brands, as well as local artists like Birch Artisan Studio and Wild Abandon Jewelry. They have also retained some of their food items from local artisans.

Like Out of Ireland, the General Store’s business began to pick up and thrive in late 2021. Fyall told the Martlet that a second location/business opened in November 2021 named Blacksmith Shoes.

Like Palmer, Fyall said that though there has been an influx in cruise ship travellers, the percentage of people coming in from cruise ships has been “spotty.”

Despite having inconsistent cruise ship engagement, the store has been able to thrive. How? The reason is the same as Palmer’s business. Locals have had a huge impact on the business success.

“What ended up happening is the locals in Victoria just wrapped their arms around us and used us as their local, safe little store,” Fyall said. “We were all so surprised and grateful … that locals came to us.”

Not only did Victoria locals come through for Merchant Quarters, Canadians from across the country had and continue to have a great impact.

Fyall’s closing words were again a shoutout to the locals and the immense gratitude her and the owners feel for how much they helped the business thrive.

Though these two businesses are only a small look into the business world of Victoria, they offer unique insight into how the last two years have affected this world. Due to the ongoing pandemic, altered routes for cruise shuttles, and their decreased capacity, the cruise ships have not brought a significant amount of business to Government Street.

The message is clear: locals have had the biggest impact on local businesses. With the help of Victorians, and other Canadians, local businesses have been able not only to survive, but even thrive throughout the pandemic.