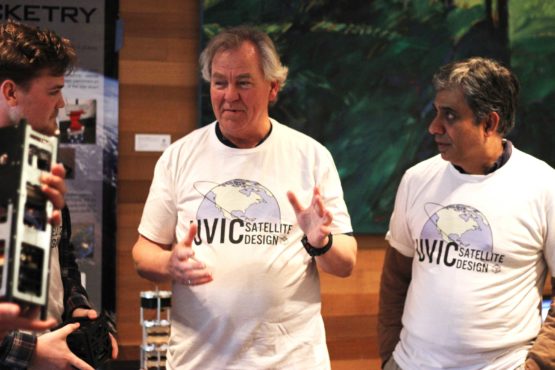 Bjarni Tryggvason, one of 14 astronauts to have served with Canada’s Space Agency (CSA), knows about achievement.

When Tryggvason was a test pilot at the International Test Pilots School in London, Ont., he conducted an engine kill test —flying an airplane to a predetermined height, switching the engine off, and still landing the plane safely without restoring the engine power.

Other engine kill tests had ended in crash landings, and Tryggvason remembers radioing the airport control tower to say, “there’s a little bit of risk to this test.”

On Friday, Jan. 19, Tryggvason attended a luncheon at UVic’s University Club as a special guest speaker. Tryggvason’s talk is one in a series of lunch meetings organized by the Vancouver Island Engineering Society (VIES) to showcase various Canadian engineering achievements.

The lunches will also raise money for engineering awards and scholarships and aim to bring an understanding of engineering to the island.

Bjarni Tryggvason is an engineer, test pilot, scientist, and science outreach speaker, and in his work with the CSA was the Payload Specialist for the Space Shuttle mission STS-85 in 1997. The mission, focused on studying changes in the earth’s atmosphere, was completed in 12 days aboard the space shuttle Discovery.

Originally an Icelandic immigrant, Tryggvason is now 72 years old, and he captivated the audience as he spoke about his plethora of past flying experiences.

Early in his career, Tryggvason was part of the Canadian National Research Council’s (NRC) team for the Royal Commission investigation into the tragic Ocean Ranger oil rig sinking in 1982. Then in December of 1983, he was selected as one of the six Canadian astronauts for the CSA.

“My reaction was, you don’t have to be limited by the things that happen to be around you now,” said Tryggvason. “And so I’ve always looked for not letting things constrain what I do.”

In 2009, Tryggvason flew a replica of the Silver Dart — the plane used in 1909 for Canada’s first controlled flight — for its 100th-year anniversary flight.

The Silver Dart was a result of Douglas McCurdy, F.W. (Casey) Baldwin, Thomas Selfridge, and Glenn Curtiss’s early experimentation with airplane construction in 1907, with the support of Alexander Graham Bell. Their first three planes, the Red Wing, the White Wing, and the June Bug all fell to the ground as failures. However, on Feb. 23, 1909, the Silver Dart, their fourth plane, successfully took to the air in Cape Breton, N.S.

A century after that flight, Tryggvason remembers thinking, “Bjarni, what the hell are you doing?” as he prepared to pilot the Silver Dart replica down an icy runway.

“Unlike the space shuttle where you get to sit there and there’s a thousand people on the ground making sure everything’s okay, I’m stuck out there all by my lonesome.” 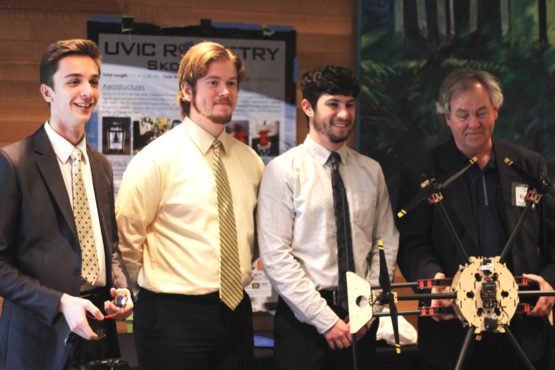 Three UVic engineering clubs were also present at the luncheon to showcase their aerospace projects.

The UVic Satellite Design Club presented their satellite, designed for the Canadian Cubesat Project to carry the instruments needed for dark energy research. UVic’s Aero Club showcased the unmanned aircraft system they designed for Canada’s Unmanned Systems Student Competition. The UVic Rocketry Club showed off their most recent rocket, designed for an international intercollegiate competition later this year in America.

More science and engineering talks like Tryggvason’s will be organized by VIES throughout the year and hosted around the city. Upcoming topics include the benefits of Canada’s space program and the CRD Waste Water Treatment Project.

As to what the future holds for Tryggvason, he’s going to tone down the work, pursue his personal interest in fundamental physics, and work on projects to improve B.C.’s education system.