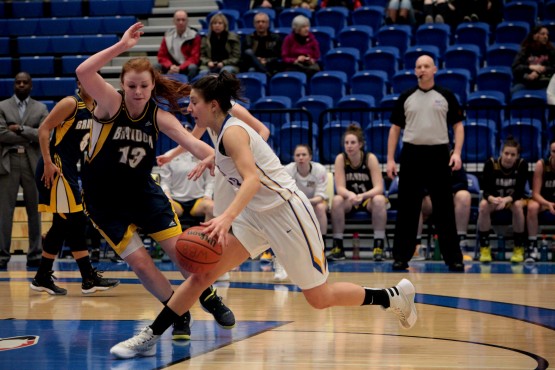 When you spend $77 million on a new court, it’s nice to be able to use it as much as possible.

And CARSA will soon have its first taste of Canada West post-season action: the UVic Vikes women’s basketball team booked their berth in the playoffs with two vital wins against the Brandon Bobcats.

The Vikes’ two wins — by scores of 76-66 and 70-65 — guaranteed a playoff spot, and with the UBC Thunderbirds winning twice against the Winnipeg Wesmen, the Vikes have the honour of playing the first post-season games in CARSA Feb. 26–28.

The Vikes started the weekend as well as possible, with a 76-66 victory in the Friday night game.

Amira Giannattasio was the star of the show, with the second-year guard hitting six three-pointers and racking up 27 points in total, and captain Jenna Bugiardini chipping in with 22 points.

With the pressure of playing for the postseason hanging above their heads, the young Vikes had a nervy start to the game. Easy shooting opportunities were passed up and simple defensive plays weren’t being made as Brandon raced to a 20-15 lead heading into the second quarter.

The Bobcats continued to put the Vikes to the sword, and the away team led by 13 points with three minutes left in the second quarter. However the Vikes showed their first bit of resistance to reduce the deficit to eight, and they trailed 39-31 at the end of the second quarter.

The Vikes needed a drastically different second half— and that’s what they got.

The home team started the second half with a 12-0 run to give them their first lead of the game. Giannattasio, who only managed seven points in the first half, was the catalyst for UVic, with her impeccable three-point shooting reviving the spirits of both her team and the crowd.

Bugiardini chipped in to help increase the Vikes’ lead, as the Bobcats began to roll over — apparently so shocked by the Vikes’ resurgence that they forwent any of the impressive play they had shown in the first half.

UVic saw out the rest of the game comfortably, winning the first game of the double header by a score of 76-66. 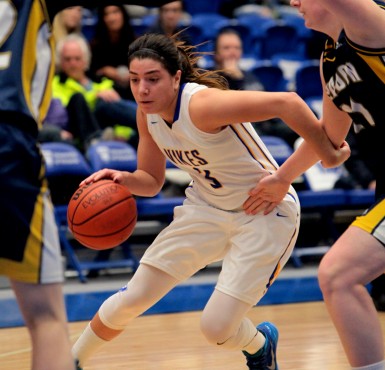 The second game was a scrappy back and forth affair, with each team trading scoring runs.

UVic got the brush-off consistently inside the paint (forward Nicole Karstein went 0-8 in the first half), but their three-point game was a masterpiece, with Dheensaw, Gallagher, and Krug all burying vital points from outside the arc.

The game was balanced on a knife-edge at halftime, with the Vikes leading by a score of 40-36. With UBC having trounced Winnipeg, UVic’s fate was entirely in their own hands — maintain their lead in the second half and they win the right to host CARSA’s inaugural post-season games.

Guard Jenna Krug led the Vikes’ second-half charge, scoring eight points in the third to increase her team’s lead to 12 points heading into the fourth.

But with Brandon embarking on an 8-0 run to start the fourth period, the Vikes’ second 12-point lead was threatening to fare the same fate as the first — disintegration.

This time, however, the Vikes showed their mettle and clung to their lead, and with some crucial baskets from Krug, the home team eked out a 70-65 victory.

Coach Dani Sinclair was satisfied that her Vikes team had dealt with the pressure that came with the do-or-die game.

“We’re a young team, so it’s really important,” said Sinclair. “You don’t get a lot of opportunities to be in playoff-type games and that was a playoff game. Loser was done. It was important to gain that experience.”

The Vikes will need every last bit of their experience as they host Trinity Western University in a best-of-three match-up, starting tonight at CARSA.