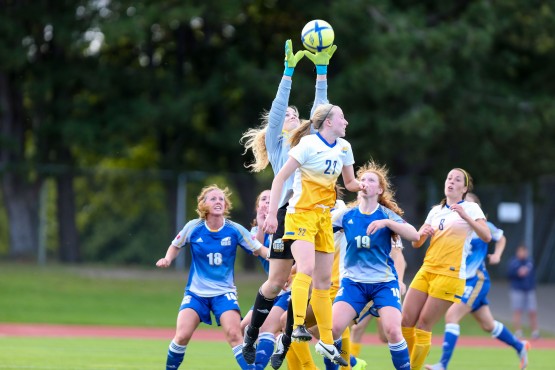 The Vikes women’s soccer team endured a disappointing defeat against UBC on Sept. 5 Photo via APShutter.com.

The Vikes women’s and men’s soccer teams both hit the pitch Saturday, Sept. 5, though the outcomes couldn’t be more different. The women’s team lost a tight home game against UBC by a score of 1-0, while Vikes winger Craig Gorman scored his first goal of the season for an impressive draw at UBC.

At Centennial Stadium, the first half between the women’s teams was an even affair, with both teams taking it in turns to control possession and create chances to score. Both teams played tentatively to begin, but with only twelve of the twenty-two players on the pitch having played in the same fixture last year, the lack of cohesion was understandable.

UBC started the game as the stronger team, with the Thunderbirds’ Taylor Shannik shaving the post from 18 yards after poor defending from UVic allowed her acres of space in the Vikes penalty area. The first chance for UVic came later with experienced forward Sarah Douglas. After being sent through on goal following an incisive pass from midfielder Mia Gunter, Douglas only had the keeper to beat. However, with good defensive pressure coming from UBC’s Emma Kallner, Douglas failed to trouble the Thunderbirds goalkeeper Olivia de Goede and fired over from 10 yards.

Despite starting with a careful and impressive passing game, the Vikes’ failure to convert their chances meant it was no surprise when UBC took the lead. With 10 minutes remaining in the half, the Thunderbirds made three substitutions, changing both the personnel and the momentum of the match. With seconds remaining in the half, midfielder Shannik took advantage of some space, finding substitute Jasmin Dhanda with a through ball that split the heart of UVic’s defense. Dhanda rounded goalkeeper Meghan Storie and finished into the empty net, putting UBC one goal to the good.

The second half began entertainingly, with good chances for either side. UBC centre-back Shergill had an effort deflected into the arms of goalkeeper Storie, while Douglas again came close to opening the scoring, but put her effort high of the target. The frantic pace lasted for several minutes, but both teams struggled to carve out any real opportunities in the final 30 minutes.

The crowd was briefly roused when a scramble in the UBC box ended with the ball at the feet of UVic winger Kiara Kilbey, but keeper de Goede did well to hold her shot from close range. That marked the last chance for the Vikes, who found themselves stifled by a resolute Thunderbird defense for the remainder of the game.

While it may have been a narrow margin of defeat, Vikes assistant coach Dave Dew was far from pleased with the performance.

“We didn’t come completely prepared,” said Dew. “We had a 20-minute spell in the first half where we dominated them, got a shift in momentum, and then we let it get away on us.”

Dew also mentioned the lack of cohesion as a possible reason for why the Vikes are left without any points after their first game.

“In the second half, we were fighting the momentum. We didn’t string together any passes like we can and we weren’t first to the ball. There’s a pile of things to be dealt with between now and next weekend.”

While “new” may have been the theme of the women’s game, it was the old faces that performed for the men’s team in their Vancouver season opener. The Vikes went down a goal to UBC’s Gagan Dosanjh early on, but it didn’t take long to recover, with fifth-year Craig Gorman tying things up. Gorman, who has been a consistent performer for the men’s team, is in his final Vikes year, along with teammates Cam Hundal and Dominic Colantonio.

The results may not have been ideal for both teams, but, with a lot of soccer yet to be played, there are sources of optimism to be found wherever you look. Whether you’re a fan of impressive newcomers or returning favourites, there are plenty of things to be excited about for Vikes fans.