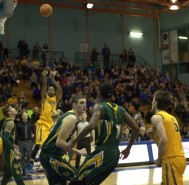 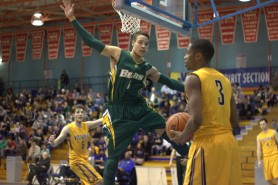 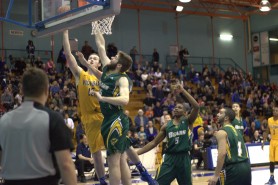 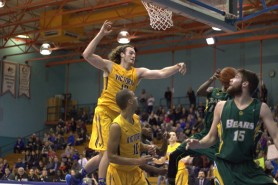 Backed by outstanding performances from their veteran players, the Vikes men’s basketball team made short work of their Canada West quarterfinal opponents, the University of Alberta Golden Bears, en route to a two-game sweep.

However, that was the final time that the U of A would beat the Vikes this season. Once conference play began, the Vikes won all four games over the Golden Bears this season by a combined margin of 55 points — including last weekend.

This season’s dominance over the Golden Bears will likely be savoured by the Vikes due to the 2013-14 campaign, wherein the Golden Bears defeated the Vikes in the CW championship — and then again in the CIS bronze medal game in Ottawa. Clearly, the Vikes had revenge on their minds when they hosted U of A this season.

In a season marked by steady progression and veteran leadership, the Vikes were able to beat the Golden Bears when it mattered most, sending last year’s CW champions home without an opportunity to defend their title.

The final game of this year’s CW quarterfinal was an emphatic 81-67 win at home in McKinnon Gymnasium — the final basketball game ever played on that court.

After finishing the CW quarterfinal with 22 points and 11 rebounds in Friday’s clinching game, Vikes senior forward Chris McLaughlin capped what had been an exceptional month in his collegiate career. McLaughlin was named the CW Most Valuable Player and was named a first-team all-star after leading the Vikes to a stellar 15-5 record during the regular season.

The Vikes now look ahead to the CW Final Four which will be hosted at the University of Saskatchewan, a privilege gained by earning the number-one seed through the regular season. The other three teams in the Final Four are the UBC Thunderbirds, the U of S Huskies, and the University of the Fraser Valley Cascades.

The top two teams from the CW Final Four advance to the CIS Final Eight tournament hosted by Ryerson University in Toronto. However, there are distinct advantages to being the CW champion — including a preferable seed in the CIS finals.

Aside from national seeding, a conference championship would be a remarkable achievement for the Vikes simply because, despite a number of very successful regular season in recent years, they have not won a CW title since the 2005-06 season.

If the Vikes are going to break that streak, they will have to contend with the Huskies who have handily beaten the Vikes in all three meetings this season. The U of S are top-seed and will be playing on home court — where the Huskies have only lost once this season — making the Vikes’ challenge even more substantial.

The Huskies will not be the only tough test for the UVic next weekend. The Vikes will also have to contend with UBC who happen to be the top-scoring team in CW, averaging 88 points-per-game compared to UVic’s 78.6. UBC also lead CW with 620 field goals and a 48.7 field goal percentage.

Rounding out the CW competition are the UFV Cascades, owners of the best regular season record in the conference at 17-3. The Cascades were ranked first in the Explorer Conference and swept the University of Calgary Dinos in their CW quarterfinal to head to their fourth straight Final Four.

UFV’s biggest strength is inside the paint, and they led the conference in rebounds during the regular season, averaging 42.6 rebounds per game. Comparatively, the Vikes finished the season ranked eighth in CW and will certainly have their work cut out for them against the Cascades as well.

No matter who the opponent, the Vikes will be leaning on McLaughlin and other veteran players in order to guide them back to the national championship. With four formidable rosters, the CW Final Four has the makings of a classic weekend of collegiate basketball.