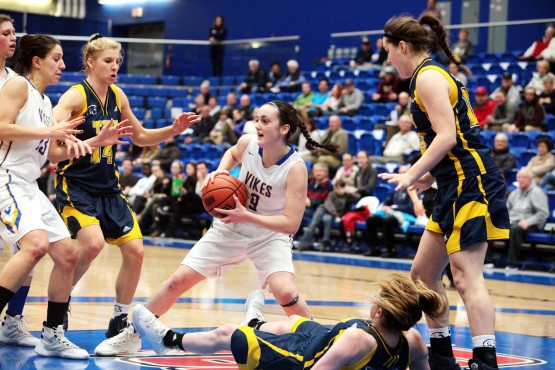 The Vikes kept their post-season dreams alive, beating the Trinity Western University (TWU) Spartans 2-1 in their best-of-three series. The Vikes opened with an 84-69 victory on Friday, Feb. 26th, but TWU pegged them back with an 84-79 win in the second game on the 27th. The tie-breaker was fraught with tension and tiredness, but the home team were able to overrun the Spartans late in the game for a 62-44 victory.

The wins send the Vikes to Edmonton to play Grant MacEwan University from Mar. 4–6 in the CWUA playoff quarterfinals.

The Vikes will need every minute of their six-day break to recover before their first game against MacEwan; the Spartan series was a perfect exhibit of physicality and intensity leaving both teams exhausted by the end of every game.

All three games followed a similar pattern, with the Vikes taking an early lead, the Spartans fighting back, and then one of the teams taking control late in the game.

The Vikes opened the series by ramping up an eight-point lead in the first quarter of Game 1, only to be staved off by the Spartans to leave a meagre two-point lead for the valiant Vikes at the half.

But the home team really made their presence felt in the third quarter, with a late three-pointer from Kristy Gallagher giving UVic their first double-digit lead of the game. Captain Jenna Bugiardini helped stretch the lead to 14 with a big offensive rebound and basket, and the Vikes outscored TWU 46-33 in the second half to finish the game 84-69 winners.

But, despite a speedy opening that took the sluggish Spartans by surprise, the frenetic nature of the game again caught up to the Vikes in Game 2, and the home team were unable to sustain the pace in the second quarter. Turnovers became a problem for the Vikes, and TWU embarked on a 13-4 to start the second quarter — a quarter capped with a buzzer-beating layup from TWU’s Luca Schmidt that slimmed the Vikes’ lead to 35-31 at the half.

Now it was TWU’s turn to beleaguer the opposition, with the game turning into a physical, chippy affair. With both teams’ shooters heating up, UVic and TWU took it in turns to take the lead. But playing with all the intensity of their namesakes at Thermopylae, the Spartans overtook the Vikes and were able to outlast them.

Led by a clinical shooting performance from guard Jessie Brown who scored 18 points in the fourth — she finished the game with 34 — TWU downed the Vikes 84-79 and forced another Game 3.

The third game was an ugly melee, with tired legs and minds leading to mistakes made and chances missed. Thanks to a massive 18 points from the paint, however, UVic ended their second consecutive game with a double-digit lead after the first quarter.

But, true to form, the Spartans staged a second-quarter comeback. The Vikes only managed to add six points to their first-quarter tally, failing to score a single basket for eight whole minutes. Thankfully for UVic, they managed to limit TWU to only twelve points, but their lead heading into the fourth was a flimsy one.

Step forward Nicole Karstein, whose incredible defensive display pulled the Vikes from the edge. Karstein notched up seven rebounds, six blocks, and eight points, and it was her leadership that stabilized the Vikes and prevented yet another comeback from TWU.

With the Vikes’ defence a brick wall, the Spartans only carved out 18 points to UVic’s 32: the Vikes held on as 62-44 winners — though celebrations beyond the limpest of high fives were postponed as the physical toll sank in for both teams.

Despite the sloppy nature of the final game, coach Dani Sinclair was happy that her team’s defense performed so well.

“You knew in the third game of a three-game series it was going to be a bit ugly, so you had to lock down defensively,” Sinclair said.

Sinclair acknowledged the importance of Karstein.

“She kept us in it, in a lot of ways. She was kind of the anchor for us today,” said Sinclair, “and no surprise — she’s been big for us all season . . . we’re really proud of her.”

UVic’s Kristy Gallagher agrees with Sinclair, calling Karstein a “gift” to her teammates.

“She can really come through in the moment when we need her,” Gallagher said. “She’s a key player.”

Karstein will be called upon again on March 4th, when the Vikes begin their three-game series against Grant MacEwan University — a team that finished first in their respective conference.