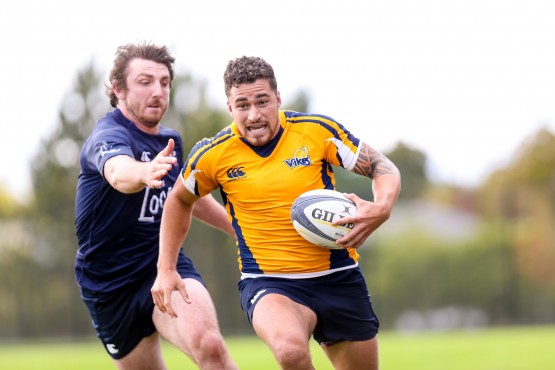 The Vikes men’s rugby team maintained their perfect start to the season under the lights at Centennial Stadium on Friday night, Oct. 16, beating James Bay AA by a score of 41-22.

James Bay, who fall to a 1-3 record in the season, were undone by their inability to penetrate the Vikes’ defense often enough, while the Vikes excelled with several quick passing plays leading to scoring opportunities. With both teams playing for the Barnard Cup — awarded to the team at the top of the four-team league — the Vikes sit atop the standings while James Bay remains third.

The first half went almost as well for UVic as they could have hoped, reaching half-time with a 20 point lead. The second half was a much more frantic affair, but the Vikes did enough to see out the game and win their fourth game in a row.

With a strong crowd in Centennial Stadium, the first half got off to a frenzied start. Both teams had chances early on by their opposition’s try-lines, but only UVic could capitalize. First, outside-half Gradyn Bowd scored his first points of the season with a drop-kick, before a quick passing play from one side of the pitch to the other saw Vikes’ winger Kaprieli Vataiki put UVic up 10-0.

Throughout the first half, James Bay struggled to cope with the Vikes’ ability to break quickly and pass effectively. Centre Joe Erlic and number 8 Bhiamie Williamson were dominant in the heart of UVic’s lineup, and good play from both of them led to a try for flanker Oliver Nott.

James Bay finally got on the scoresheet after Vataiki scored his second try of the game, but UVic ended the half with the final say as Vikes’ outside half Giuseppe du Toit added to his three conversions with a penalty to make it 27-7 for UVic at half-time.

A penalty for the visitors to start the half cut the lead to 17, and another try (with a failed conversion) from James Bay’s Graham Harrison just ten minutes later meant the Vikes led 27-15.

The game became even more frenetic after Harrison scored his try, with UVic’s Williamson bowling through the James Bay defense to extend UVic’s lead once again. Just minutes later, however, the visitors’ Aaron Evison scored between the uprights. The scoring would not stop there — Vikes’ Nott tallying again just seconds after James Bay to make the score 41-22 with just over ten minutes remaining.

The Vikes were struggling to deal with a re-invigorated James Bay side, but for the final ten minutes they held strong enough to finish victors and remain in a favourable position looking towards the Barnard Cup at the end of the season.

Oliver Nott, who scored two tries in the win, attributes the Vikes’ unbeaten streak to good chemistry within the squad.

“All the boys know each other,” said Nott, “so we gel well as a team. We’ve been working really hard in practice.”

Nott explained how the Vikes’ loss in the Barnard Cup final last season has made the group push harder, and with three tries this season, Nott has played his part.

“Yeah, I got a bit of beef,” laughed Nott, “but it’s just all about being in the right place at the right time. That’s my job.”