Men’s team knocked out in Saskatchewan 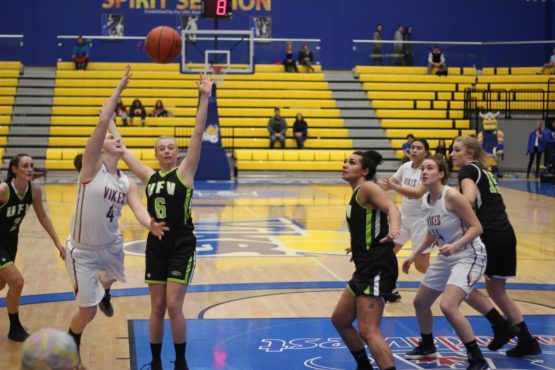 Morgan Roskelley drives to the basket against the UFV Cascades. The Vikes won the game and progressed to the Canada West quarter finals. Photo by Zack Wheler, photo contributor

It was lucky number 13 for the Vikes women’s basketball team, who saw their win streak continue into the postseason with a 91–62 win over the University of Fraser Valley Cascades on Feb. 9.

Playing in a three-quarters empty CARSA arena, the Vikes scored the first points of the game and never looked back, leading for the next 39 minutes.

Their win will see them progress to the Canada West quarter-finals, where they’ll play a best-of-three series against the University of Calgary Dinos starting on Feb. 16 in Calgary.

Unfortunately, they won’t be joined by UVic’s men’s basketball team, whose playoff hopes ended with an 82–80 loss to the University of Saskatchewan Huskies on the same day as the women’s game.

The women’s team were in control for much of their game, led by the trio of Amira Giannattasio, Kristy Gallagher, and Katie Langdon. Their offensive prowess — those three alone combined for more points than the entire UFV team — could not be matched by the Cascades, who struggled to finish off a number of chances and saw top scorer Shayna Litman finish with only 18 points.

It was a clinical performance from the Vikes, whose confidence in attack was clearly aided by the momentum built from their win streak.

“It’s pretty surreal. We’re on a high right now,” said Amira Giannattasio, speaking about the winning run after the game. “It gives the team a lot of confidence, moving forward especially.”

But coach Dani Sinclair thinks the playoffs will put a new spin on the team’s winning streak.

“To me, this feels like one in a row,” Sinclair said. “It all starts over again.”

The Vikes dominated the first quarter, with Calli McMillan injecting pace and energy into the home team. UFV began to fight back in the second quarter, scoring 12 unanswered points to come within five points of tying the Vikes. But Giannattasio and Langdon continued their scoring up until the last minute of the half, with Giannattasio swiping the ball from the unsuspecting Litman and shooting it into the opposite net, allowing the Vikes to enter the second half with a nine-point advantage. 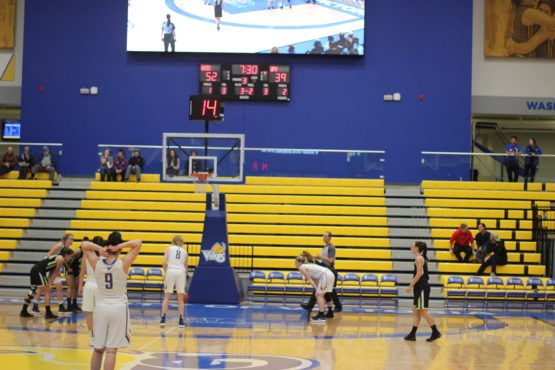 The Vikes dominated the Cascades in a stadium that was devoid of most students, with reading break just around the corner. Photo by Zack Wheler, photo contributor

The third and fourth quarter saw Gallagher and Giannattasio firing on all cylinders, and UVic’s 46 second-half points meant it was a comfortable finish for the home team.

It’s a comfort they likely won’t be afforded now that they are in the thick of a playoff run, but both Giannattasio and Sinclair are certain the team is ready for the additional pressure.

“We have a lot veteran players and we’re used to it,” said Giannattasio. “We’ve gotta just keep the confidence up, especially for the younger girls, and just keep moving forward.”

The men’s team were knocked out of playoff contention earlier that evening, losing 82–80 to the University of Saskatchewan Huskies. After trailing 42–24 at the half, the men’s team scraped themselves back into the game, putting up an impressive 56 points in the third and fourth quarter.

With 11 seconds remaining in the game, the Vikes took just their third lead of the game (up 78–77). But playoff progression was not in the cards. The Huskies took a one-point lead with two seconds left, and UVic’s Jason Scully saw his last-gasp three-point attempt bounce off the back of the rim and away into the court.

The buzzer sounded, Scully fell back onto the court with his head in his hands, and the men’s season ended.