Vikes women look to bounce back in playoffs 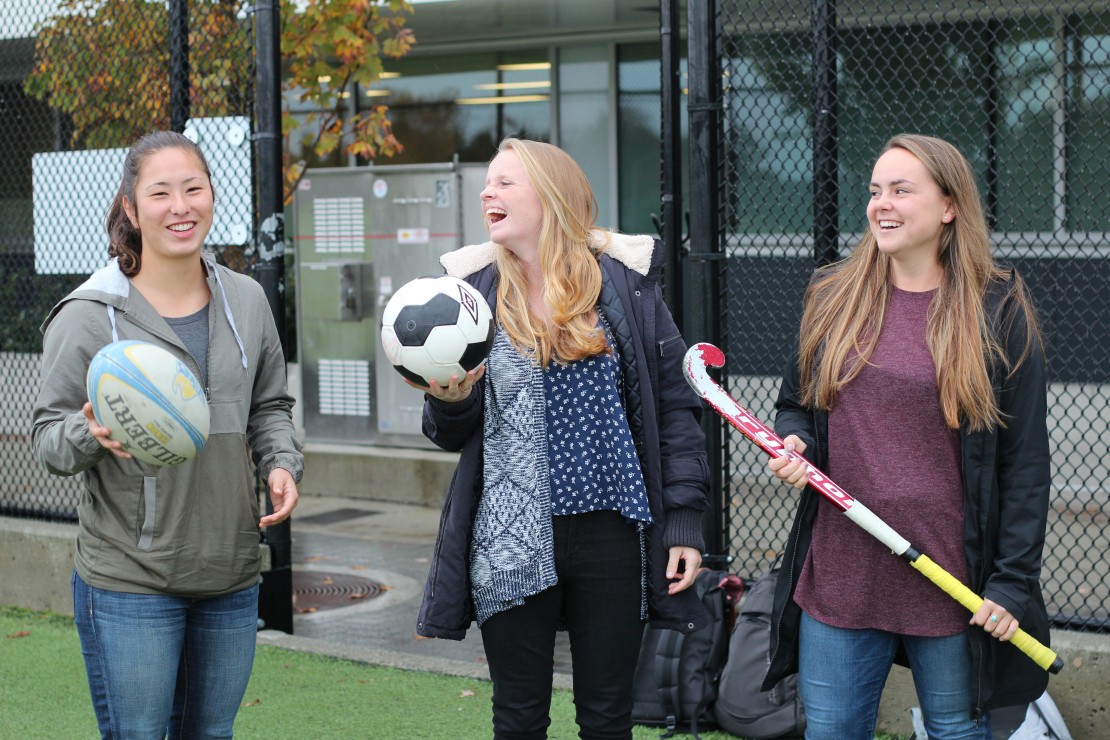 From left to right: Jess Neilson, Elise Butler, and Annie Walters-Shumka all have huge games coming up for their respective teams, starting this weekend for Vikes women’s soccer and continuing next weekend for the field hockey and rugby. Photo by Cormac O’Brien/Staff Writer

Whether you’re a women’s soccer, rugby, or field hockey player, it’s been a rough 12 months.

Last November, a 2-1 loss to the University of Calgary Dinos meant the Vikes women’s soccer team had crashed out of the Canada West playoffs for the third year in a row. In the same month, the women’s field hockey team lost to UBC in the Canadian Interuniversity Sport (CIS) National Championship Final — in a shootout, no less — and just last week, on Oct. 23, the women’s rugby team lost their Canada West final to the Dinos as well.

It’s enough to make you quit your sport, but for athletes Elise Butler, Annie Walters-Shumka, and Jess Neilson, the 2016 playoff season offers the perfect opportunity to rebound and more than make up for their recent disappointments.

The women’s soccer team heads to the Fraser Valley on Saturday, Oct. 29, for the Canada West playoffs, while both the field hockey team and the rugby team play at their respective CIS National Championships — hosted in Toronto and at UVic respectively —from Nov. 3–6.

It’s the third year in a row that all three teams made it to their respective postseasons, though only the rugby team has medalled in that time — winning gold in the 2015 Canada West playoffs.

For Neilson, a third-year Political Science major and fly half for the Vikes women’s rugby team, the losses are part and parcel of competing at a high level.

“It hurts,” says Neilson, “but we’re all competitors at the end of the day, and you don’t play this game just to always win. So you learn more from those losses going forward than maybe having won a bunch of games in a row.”

Butler, a fourth-year Business major and defender for the soccer team, has the same mentality; her team’s previous defeats provide fuel for a greater intensity in this year’s playoffs.

“We’re optimistic going into the playoffs because we play a team that we do not like . . . so we expect some fire,” Butler laughs. “[But we] played this team last year [in the same playoff round] as well and we won . . . so I don’t think they’re looking forward to playing us.”

Butler has yet to make the CIS National Championship in her four years since joining the Vikes, but this year marks the fifth time that Annie Walters-Shumka, fifth-year Kinesiology major and field hockey defender, has made it to the national stage. For her, and the other veterans on the team, the emphasis is less on participation and more on winning it all.

“Every year [on the team] has been a great experience, but I just really want to make this last one a kind of special one,” says Walters-Shumka. “I think [the team is] definitely going in with a new perspective — we’re not just happy to be here, but we’re here to win.”

Walters-Shumka was one of the heartbroken field hockey players who lost the CIS final on home turf back in 2015. She calls the hosting experience “pretty cool,” but admitted it came with its own unique pressures.

“Last year we came into nationals . . . we’d won Canada West, we were probably a bit more of the favourites being the hometown team,” Walters-Shumka says, “and I think that pressure made us buckle a little bit. But I think this year we definitely don’t have those same pressures on us, so . . . I think it’s a much better year for us in terms of our mentality going into nationals.”

This year it’s the women’s rugby team’s turn to host nationals, and Neilson knows the team must work hard to avoid succumbing to those same pressures.

“We found this weekend [in the loss to Calgary in the Canada West Final on Oct. 23 . . . we were] just so tightly wound up and stressed that we weren’t able to play the type of rugby we wanted,” Neilson admits. “So just being able to relax . . . play to our game plan, and let things unfold as they happen and not just being so stressed about the outcome . . . that’s what we need to focus on heading into nationals.”

Each team faces unique pressures and concerns, but, at the end of the day, the focus is the same: winning.