The Vulture Culture student group, known for hovering around second-hand hamburgers, quesadilla scraps, and other leftover treasures of the Mystic Market tray racks, is circling around a different type of prey: UVic’s food policies.

Vulture Culture and UVic Food Services have recently been engaging in dialogue around food-safe alternatives for salvaging food waste, but whether steps will actually be taken by the university remains uncertain.

“Vulture Culture is at a bit of a charged standstill,” says group co-founder Megan Dewar, explaining that communication and collaboration with Food Services has been, and continues to be, a lengthy and cumbersome task. 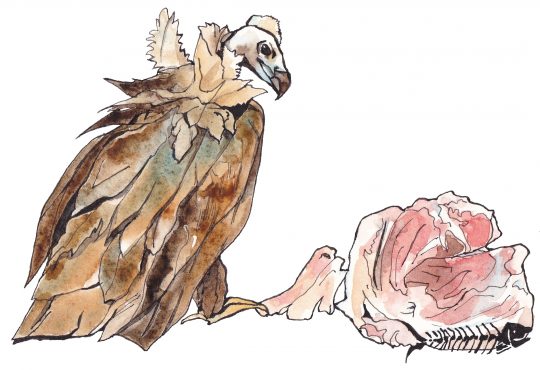 “We’ve spent the summer sorting through more bureaucracy than we have trays,” noted the group in its most recent Facebook post on Oct. 11. “As you may know our methods were controversial, but our goals of increasing food security and reducing food waste are shared among many. So in hopes to achieve these goals, we are directing our efforts to changing some policy at UVic.”

Vulture Culture’s central proposals include a reduction in overall portion sizes and a suspended meal program, says Dewar. This meal program would allow students who don’t eat as much food to have the option of suspending the remaining portion for any future customers who aren’t able to afford a meal. It takes after the idea of “suspended coffee,” a similar initiative started in Italian cafés.

Food Services wouldn’t comment as to whether they plan to implement either of these proposals. Instead, they sent a statement saying they “really discourage” the act of eating leftover food off trays.

“There is no way to tell if the leftovers are sanitary,” Jim Forbes, Director of Campus Services, said.

But Dewar and Vulture Culture believe a suspended meal program could serve as a less-contentious alternative to salvaging food while meeting the food safety needs of the university. The proposals also appear to align with Food Services’ focus and mission statement.

“For nearly two decades our focus has been on looking at new ways to incorporate sustainable practices into our food service delivery,” says Food Services’ on the UVic website. “We will demonstrate this commitment through purchasing and operational practices that minimize our carbon footprint.”

UVic’s goal of reducing its carbon footprint could be a leverage point for Vulture Culture if UVic decides to consider their proposals.

Food Services already has an impressive record of diverting waste from the landfills, and UVic’s website proudly claims that Mystic Market is “the first ZERO Waste Facility on campus.”

Under Food Services’s rubric, however, none of the food that is tossed in the compost falls under its “waste” category.

But Dewar says, “when perfectly edible food doesn’t end up eaten, that is waste.”

“I think that is so much more challenging than just putting a bin out there because it’s a culture shift. It’s a huge culture shift.”

Until things begin to change, Vulture Culture will remain in its Mystic Market roost without rest, watching UVic’s next move as intently as it observes the leftovers piling up in the racks.