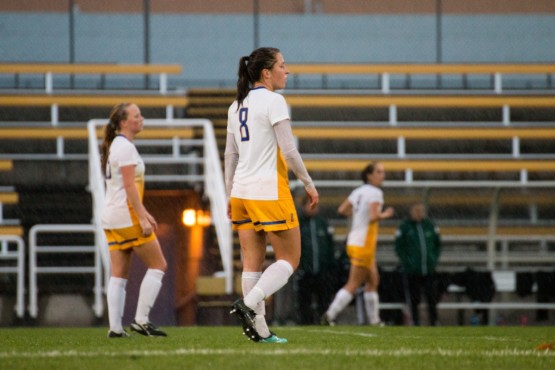 It was a weekend of conflicting emotions for Vikes soccer  as the UFV Cascades upset the women’s team 3-0, only for the UVic men’s team to return the favour and win 2-1.

The planned double-header started with a 3-0 loss for the UVic women’s team, who found it difficult to come back after conceding two goals in just two minutes midway through the first half.

Despite dominating the possession, the Vikes found themselves down after an exceptional ten-minute sequence from the Cascades who scored twice in three minutes to give themselves a comfortable lead.

The Cascades’ midfielder Avneet Bhullar bundled the ball over the line following a Tristan Corneil corner kick, and Carley Radomski added to UVic’s misery as her uncontested shot from 20 yards skidded past Vikes’ keeper Meaghan Storie, who hoped to have done better on both counts.

The second half began with more Vikes pressure, yet they soon found themselves down by three goals. The home team struggled to clear a corner kick, and Radomski buried her second goal of the evening past Storie.

A clinical UFV gave their opposition a lesson in finishing their chances, as they made the most of their few opportunities. The Vikes, whose attack has been impressive for the majority of the season, struggled to find that crucial final ball and suffered for it.

With their passing game rendered useless on the sodden pitch, UVic struggled to truly threaten Kayla Klim in the Cascades’ goal. The brutal weather conditions favoured UFV’s direct and physical style, and they looked comfortable defending a UVic side that was disappointed with the unflattering result.

The men’s game, which was pushed to the following day due to rain (poor pitch conditions forced the game onto artificial turf), was a much more even affair with UVic finishing on top with a 2-1 win.

After a tense and physical opening 30 minutes, the home team took the lead following some lovely combination play from Michael Baart and Tarnvir Bhandal. The ball eventually found its way to Cam Stokes who tapped the ball past goalkeeper Mark Village for his ninth goal of the season and his first of the playoffs.

Yet their lead was brief, as UFV midfielder Connor McMillan grabbed a controversial equalizer for the Cascades following a goalmouth scramble. The referee was at the centre of this controversy, with many of the Vikes defenders claiming that there had been a handball and a foul on goalkeeper Noah Pawlowski in the lead-up to the goal.

In the second half,  the Cascades came close to getting ahead several times—Pawlowski made some vital saves—and the Vikes thought they’d won it with just 15 minutes to go, following Cam Stokes’ header from Cam Hundal’s cross. However, the goal was disallowed with the linesman’s flag raised for offside.

Vikes’ coach Bruce Wilson was upset at the decision, as most on the sideline saw nothing wrong with the goal.

Thankfully for Wilson and his team, the decision would prove to be trivial as Stokes once again rose high to head home an injury-time winner for the Vikes and send them to the Canada West final in Saskatoon.

With 10 goals so far this season, veteran Stokes is proving to be vital for the Vikes, but it was the team performance that had head coach Wilson smiling.

Confidence will be high in the UVic camp, as they showed an admirable amount of strength and commitment to overcome a UFV side who pushed them right to the final whistle. An assist from substitute Paulo Dait also demonstrates the depth of the Vikes’ squad—depth that Wilson believes will be important come the next round of the playoffs.

“We’ll be going to Saskatchewan healthy,” says Wilson, “and that’s a bonus for us. We’ve got a lot of players to pick from, and we will use a lot of those players as well.”