What are men good for? 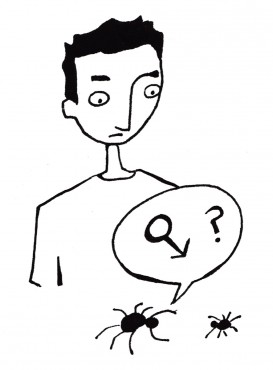 “What are men good for?”

This exchange occurred in a feminist debate with my friend. Both remarks were made in jest, but my quipped response to her sarcasm knocked around in my mind afterwards . . . was that last example really a joke?

The first two examples were obviously subjective nonsense. I despise, yet respect, arachnid forms, so I’d rather have somebody slay the beasts for me. I’m somewhat vertically challenged, so I’m occasionally reduced to scaling supermarket shelving (I recommend the structural soundness of Save-On over Wal-Mart shelving); it might be nice, perhaps, to have a taller human around to assist.

Neither example has necessary gender imperatives: dudes, dudettes, and anyone throughout the gender spectrum could share these distinctions. The idea that male identifiers would be useful to me in these regards, due to some extension of natural function, is ludicrous: as a feminist, I mock the notion. But the third use, sex? Uh-oh.

As a hetero, cis female, men are useful to me in this regard. Occasionally, they’re even good. Unlike the first two examples, sex is something this independent woman can’t seem to have as much fun doing alone (it’s a sliding scale, sure, but it’s been the general rule for me so far). Should my feminist principles be shaken by this realization?

It’s certainly possible. Sex is loaded with subjugation potential. Historically and contemporarily, sex has been used as a manifestation of gendered domination: physical, psychological, emotional. Rape as a weapon of war is perhaps the most devastating expression in consistent existence since, well, war. Any girl who’s ever been to a bar has probably been groped. Even in the dregs of online fan-fics, language expresses the binary assumption: The man takes, the woman gives. The guy fucks, the girl gets fucked.

Perhaps the weirdest part of this issue is the cross-over into non-cis relationships. Individuals may identify “husband” and “wife” in same-sex pairings, or identify the “man” in the relationship based on sexual dominance. The perpetuation of these norms seems inescapable, especially as consenting adults find gratification in them and through them . . . and I’m probably one of those adults.

So, am I a bad feminist? Hell no. Here’s a couple of reasons why: first, being aware of my complete authority over my body, and my right to expect respect from individuals regardless of situation has helped ensure, thankfully, that I’ve never yet been in a sexual situation beyond my control. Subjugation is off the menu; even gropers offer a chance to educate ignorant males (I’ve yet to have a female groper, but I’m going to assume that’s mutual respect rather than indifference).

Second, what a feminist does in the bedroom should be their own pleasure; the only principles at hand are that human beings are worthy of political equality and respect. These are not values negated by any sexual fantasy or activity. If you make sure you and your partner[s] know that truth and won’t forget that truth before, during or after, and I’d say you’re square with feminism. So go have fun: just know who you are and what you like, and if anybody forgets, remind them. Loudly.