What to do about the dark

Working together to expose sexualized violence

For most of my life, I remember my mama warning me about walking alone at night. I know that she didn’t fear for her daughter because of the dark — she feared the people and violence that can lurk behind it. While it’s true that about 65 per cent  of sexual assaults happen after 6 p.m., sadly harm does not only happen at night.

As the recent Harvey Weinstein scandal proves, the dark truth is that sexual assault can happen anywhere at any time. The scandal has served as a catalyst for conversations on sexual harassment and has started the #MeToo movement. A secret that haunted many is now common knowledge and constantly in the news.

The Weinstein scandal started on Oct. 5 when The New York Times published an article that detailed allegations of the famous producer’s sexual assaults. Over the following weekend, multiple women in the entertainment industry came out with stories corroborating the claims. The most recent actress to open up about Weinstein’s sexual abuse is Lupita Nyong’o, who joins a long list of over 50 women who have allegedly experienced Weinstein’s sexual harassment.

The entertainment industry does demand intimacy, such as filming sex scenes in movies, as a part of the job, but harassment is not acceptable no matter where you work. Unfortunately, this type of sexual harassment, whether overt or dangerously subtle, is seen in many industries other than show business. 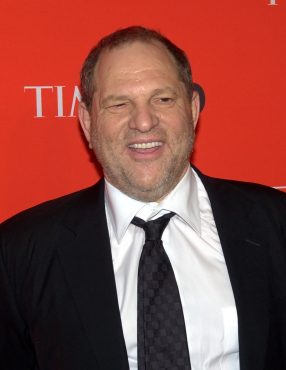 The recent exposure of Harvey Weinstein as a serial sexual harasser has inspired a flurry of conversation regarding sexualized violence.
Photo by David Shankbone via Flickr

As an outgoing, very social person, I’ve gone out to dinner with many more-senior male colleagues while working in the male-dominated engineering industry. It horrifies me to think of what could have happened if those after-work social activities went awry, like they did for Weinstein’s victims. If my male colleagues had used manipulative tactics, such as intimidation or not accepting no for an answer, who’s to say that I would not have given in to sexual pressures?

You see, sexual harassment is evident in everyday life in school and on the streets. The most common form is verbal harassment — women are called “sluts” or “prudes” all too often. A less obvious form of harassment also occurs on the street, where women are often cat-called and leered at. Many times, I’ve walked by men (sometimes almost twice my age) who either whistle, shout out “hey sexy,” or very obviously glare at my behind. Sexual innuendos coming up in conversation is another common example.

It’s important to note that women are not the only ones being objectified; men are as well, but in different ways. Both groups face judgment based on our entrenched cultural definitions of what femininity and masculinity should mean.

These actions have always been excused with the men being called “sleazy” or the men “being creeps.” Innuendos and verbal assault are often attributed to a normal part of being in the “boys’ club.” However, I am hoping that the Weinstein scandal has given even these seemingly “minor” aggressions a negative tone.

With sexual harassment being a daily occurrence, our society desperately needs a cultural shift in its thinking, its attitudes, and, most importantly, its actions. I am by no means an expert on sexual harassment and its underlying psychology, but I believe a big step towards positive change is the strategy of bystander intervention.

Bystander intervention is when someone (a bystander) intervenes on a potentially harmful situation. It is an effective tactic to defuse bullying, sexual harassment, or any violent situation. In a sexual harassment example, a friend may interrupt a potentially dangerous moment when someone is making sexually aggressive moves on someone else. As long as we are aware of our environment, we usually notice naturally uncomfortable or confrontational situations like these.

A lot of the sexual harassment we see everyday can be mitigated if we call out our peers and hold ourselves and others accountable for their actions. Bystander intervention is not meant to shift blame on anyone else, but it makes the elimination of sexual harassment everyone’s responsibility.

It’s time for us to light up the metaphorical dark that we have allowed to seep into our daily lives. It’s time to swallow our fear and start calling out our friends, and recognizing our own guilty actions as well.

Until we start doing so, things will stay the same. Our reality will remain dark, and if I ever have a daughter, just like my mama, I’ll say “don’t walk alone at night.”

But, we have the power to change that reality  and shine light into the dark — even though we may not like what we see.