Fringe 2017: What to Take Up With Daddy Issues 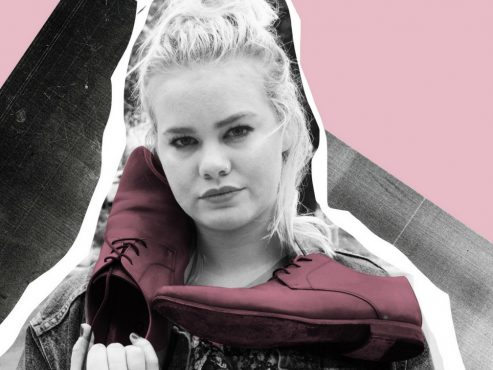 Our writer Natalia Karpovskaia reviews Daddy Issues, one of the selections at the 2017 Victoria Fringe Festival. Photo via intrepidtheatre.com

In the spirit of honestly reviewing Daddy Issues, I should get one thing off my chest: I’m not a Fringe-ie. I would probably squint in confusion if someone asked me if I’d seen a Fringe show yet, were it not for the combination of my persistently critical and curious eyeballs and the often bizarre and evocative Fringe posters that seem to sprout up overnight on any and all surface that will take them. You gotta give ‘em that . . . Fringe knows how to make a big stink.

It helps that I also hate feeling left out — so I wanted to check the festival out. Nerdy theater-loving friends and random acquaintances alike all advised me that if I truly want an authentic Fringe experience, I should decide on a show at random and go in with no expectations whatsoever. Done! Easy!

So, on Sunday, August 27, I pick the best-looking poster and invite some pals.

My excitement grows upon arriving at the Metro. As I walk into the theatre, Beyoncé’s Daddy Lessons bouncing off the empty stage, I feel like I have made the right choice, especially as I turn the corner and eye a majority of visibly queer and femme folks among the chatting audience. As my group looks for seats, the theater feels fairly full for a Sunday night. I am surprised, but perhaps that’s aided by the atmosphere of tangible excitement.

Daddy Issues, a show written and produced in Victoria, focuses on four characters and their never-ending struggle with — you got it — daddy issues. Walking around a stage scattered with luggage, small pieces of furniture, and clothing, the four actors start the show by taking turns “introducing” their story to the audience. While each character avoids interacting directly with one another, and the stories don’t overlap, the general theme is clear. The male figures of authority described in this show used to drink, fight, and abuse, and these memories continue to leak into the lives of the main characters.

Simultaneously wrestling with the haunts of past father-induced trauma and frustrating daily patriarchal condescension, the characters detail childhood memories, the awkwardness of coming out, and how great it feels to be told to smile by random men on the street.

Pretty clear so far, but eventually the confusion deliberately heightens as the characters start passing written notes to one another, sharing with the audience out of context bits (seemingly) from one another’s tale. At this point, I note that there has been no established relationship built between any of the characters. Do they even know the others exist?

That observation results in a nervous feeling as I wait for the culmination of these monologues. A carefully choreographed dance number interrupts this thought process, and the four characters are talk-singing about media portrayals of femininity, nodding to the dancing-around-a-chair trope, and asking “Am I sexy yet?”

My unease is never resolved, and, ultimately, the intention of that decision is unclear as the show dips near the end. The four characters come together in a makeshift living room to finally talk deliberately to one another about astrology (odd, yes, but no doubt a nod to the queer population in the seats). Another round of storytelling monologues take place at the same time as the characters perform an onstage costume change full of metaphorically significant pieces of wardrobe, aaand . . . it’s done.

The show finishes with a standing ovation; the audience whoops while the stage full of embarrassed cast members smile shyly at the praise. I stand up, too; ultimately, I feel impressed. It seems that the show has no plot, no climax, no characters talking to one another . . . nothing that your 12th grade English teacher told you was the basis of a good play. And yet, something about it charms.

As we stream out into the cool night, friends and loitering fellow-show-goers debrief Daddy Issues in our self-consciously hushed and excited voices. We are all in general agreement on our thoughts. In a world chock full of male-centered stories entertaining “crazy girlfriend” and “emotionally needy” female tropes, we’re all so glad to have spent time away from that.

The unambiguously queer show concurrently tickled our bellies with humour and begged for introspective emotional analysis. As they walk away, Daddy Issues’ audience understands that the play is just a portrayal of a never-ending struggle: how few examples we have of storytelling agency given back to those socialized as feminine, told to respect the male figures in their lives, and how hurtful it can be to perpetually be the butt end of a daddy joke.