Over 100 year old theatre to close in Victoria, locals concerned 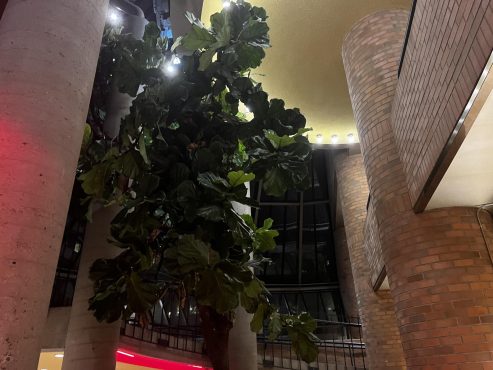 The construction of a new commercial building to replace Capitol 6 Theatres downtown has been approved, and it has left the fate of its iconic indoor fiddle-leaf fig tree a mystery.

Victoria City Council unanimously voted on Oct. 6 to support Victoria-based developer Jawl Properties’ application to redevelop Capitol 6 Theatres on the corner of Yates and Blanshard and build a modernized 10-story building containing commercial and office spaces in its place.

Capitol 6 features a massive fig tree that fills the entirety of its unique glass and brick cone-shaped entrance. Movie-goers are not only sad to see one of the city’s most historic theatres be replaced, but are also concerned about what will happen to this impressive piece of nature.

During the city council hearing, Robert Jawl, managing director of Jawl Properties Ltd., was asked about the possibility of saving the fig tree during the construction of the new building, which is aptly named Capital VI.

“We don’t know for sure,” said Jawl. “There’s been a hope on our end when we get a little closer to planning that, that there could be consideration given to how we could devise a suitably sizable root ball and remove it and transport it. We’d be open, and thrilled in fact, to do that if we could find a home.”

The exact date of the theatre’s closure and start of construction is still uncertain, but this will not be the first closure for Capitol 6. It shut its doors in 2013 when its owners, Empire Theatres, announced that they were exiting the cinema industry. Concern was also raised at this time to save the theatre’s landmark tree. Capitol 6 sat empty until 2016 when Jawl Properties bought the building and it reopened as an independent theatre. The indoor fig tree managed to stay alive through this extended closure.

Now, “The question with a specimen that old will be if it survives transportation,” says Jawl.

Capitol 6 first opened as Capitol Theatre in 1921, until it expanded to six screens in 1981 and gained its current name. It has been a major proponent of the Victoria Film Festival for many years.

Concern was raised during city council that Victoria would not only be losing a historically important landmark, but that there was no need for more commercial space downtown as there is a substantial amount of space already sitting unoccupied. Jawl responded by saying that the need for modern workspaces built with COVID precautions in mind are in demand.

The pandemic disrupted the cinema industry heavily, leading to theatre closures across the world. Though it is pending a date for commencement of work, the otherwise definitive closure of Capitol 6 means that the Cineplex Odeon just down the street will be the only remaining commercial theatre downtown.

Jawl Properties owns a substantial amount of land in downtown Victoria, including a giant glass building called The Atrium directly across from Capitol 6 —perhaps the perfect spot to relocate the tree to?