Where are the missing UVSS votes? 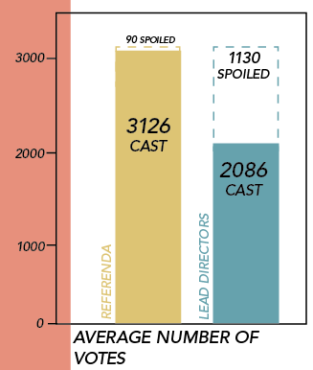 A statistical breakdown of the latest UVSS election

As the elected and acclaimed Envision candidates are readying themselves for a year in the public eye at the UVSS, we at the Martlet believe it necessary to review and evaluate a certain pertaining topic.

Namely, in the 2018 UVSS election, there was a severe disparity between the total number of ballots completed and the votes that were cast for Lead Directors, as well there being as an abysmal turnout overall. While undergraduate referendum questions each saw at least 17.37 per cent turnout, Lead Directors each received an average of 11.77 per cent of the possible student vote. This indicates that over one third of all participating voters chose to focus solely on the referendum, not casting a vote for Lead Directors. This resulted in over 1000 spoiled ballots for each Lead Director position.

Understandably, undergraduate students were left with a lot of questions as to why this happened.

A possible cause for the disparity was the scarcity of candidates. That is to say that because so few people were running for positions, very few people showed up to vote.

This suggestion is backed up by statistical data retrieved from previous UVSS elections. By comparing voter turnout and the total number of people running, we find a moderate positive correlation between the number of candidates and turnout (calculated Pearson coefficient with available data is .7087).

Meaning that if 40 people are contesting the limited seats on the Board of Directors (which has 16 seats for Directors-at-Large and Lead Directors, not including the International Student Representative), turnout will be higher than if just 16 people are running .

Now this is very intuitive logic, as one would assume that every person or group will influence various voter bases differently. A variety of options would incentivize more students to cast their vote. Even if every candidate had contact with the same demographic, with complete overlap of voter base, people would be more likely to come out to vote if they were told to vote for the position of Director of Events by the three or four candidates running for that office, instead of just one running unopposed.

In fact, with this past election in the spotlight, one can observe the difference between turnout for Lead Directors running unopposed and those running opposed, with both contested positions receiving more total votes than the uncontested positions. Following this, one could suggest that more people running every year would boost student engagement. A relatively simple, student-centred, democratic solution. 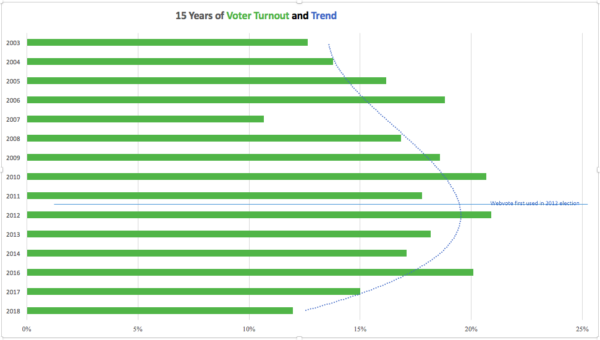 Voting online is not an archaic institution, and deserves to be criticized. Webvote was first introduced in the fall of 2011, and we have been observing a downward trend in turnout ever since. In 2014 UVic made the switch from paper surveys to digital surveys to save time and preserve anonymity, and has observed a decreasing survey turnout as a result. McGill saw a decline in their feedback after transitioning to digital in 2012.

These trends could be explained by the disconnected nature of online responses and voting. While it may be more convenient to be able to vote online, it takes the social aspect out of it. With physical course experience surveys, your professor would hand copies out in class where they would be completed communally. But now, when a prof says, “If you could all take fifteen minutes to complete the course experience survey that you’ve received in your email, that would be super helpful,” half the class has left the room by the word “/survey/.”

With solely physical voting available, students would go to the polls together, discuss candidates and their platforms, and challenge one and other’s opinions. This past election I voted while still in bed. If I were not a writer at the Martlet, I probably wouldn’t have even spoken about the election with anyone and likely wouldn’t have felt informed enough to cast my vote. That hypothetical scenario was a real-life dilemma for many undergraduates who, while they did vote in at least some of the referendums, did not feel like they had enough information going into the physical and virtual voting booths to complete their ballot. 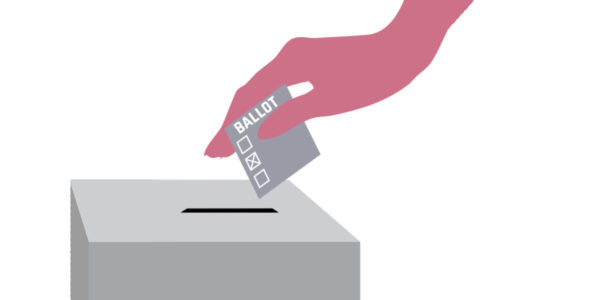 In an anonymous survey of students who did vote for the referendum questions but did not vote for all the Lead Director positions, we received some students’ reasoning as to why they did not complete their ballot.

Among these and the many other responses to the survey, there are a few commonalities. These students say that they did not know where to look for voter information, or were unwilling to expend the effort to do so, as the perceived benefit of being an informed voter was less than the cost of searching out that information. Many respondents to the survey were frustrated that they did not have an option to vote for more than one candidate for the uncontested Lead Director positions.

It was also suggested that the UVSS has an issue communicating the work it does — and especially the work its directors do — with undergraduate students leading up to elections and throughout the year. The impact a director has on the student body might not always be conveyed, and when that impact is perceived to be so low due to a lack of publicity on behalf of either the Martlet or the UVSS, students will either not run or not bother to vote.

For example, this year there were no nominations for the relatively newly established position of Director of International Student Relations for the UVSS. It should be noted that during the board term of Director of International Student Relations Dheeraj Alamchandani, not one post about his activities (naming him or his position) was made to the UVSS’ Facebook or Twitter pages.

Coming back to the disparity of votes, there are several important takeaways from this data. First, the UVSS needs to work on its communication with students through social media, and by doing so would bolster student candidacy. Second, as a campus, we should reconsider the effectiveness of online voting. And finally, all parties need to have easy-to-ingest candidate information available for voters.

One can only hope that these measures will ensure better engagement and a healthier democracy by next year’s election.

Data from the Martlet, the UVSS, and the UVSS Elections Office