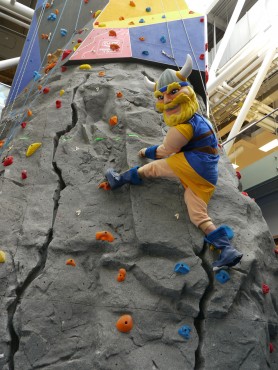 Thunder apparently took advantage of CARSA over the summer and has since then been relishing the spotlight and showing off his gains. The redesigned UVic mascot was revealed at the New Student Welcome event on Sept. 8.

Vikes Campus Engagement Officer Zac Andrus said the previous Thunder represented UVic for around six years. He joked that old Thunder was not only falling apart, but his appearance was beginning to frighten children. Andrus and the Vikes Marketing Team pro-posed the idea of reintroducing a new mascot, hoping to reveal a friendlier face behind all that blonde hair. The new design was created by a company called Maydwell Mascots and was based on the previous Thunder.

According to Vikes management, the new Thunder cost around $4 000, which Andrus explained was “cheap for a mascot costume.” He added that Maydwell Mascots will work with the Vikes to keep up Thunder’s condition and that the costume is expected to last for years. Andrus said that no athlete or student fundraising was needed in order to purchase the mascot, and so far, the new Thunder is one of the Vikes’ bigger marketing investments this year. However, Vikes Nation will continue to focus on maintaining a strong social media presence.

Andrus claims that without Thunder there would be empty space during “action downtime” at athletic events. He considers Thunder a large part of crowd engagement and wants to make sure the audience is continuously entertained during games. The new Thunder will be present at the majority of varsity games and at various campus events, and will also occasionally be found working out in CARSA. The Vikes ambassadors will join in heightening crowd excitement, while the cheer-leading team provides entertainment at basketball and volleyball games
Friday and Saturday nights.

The mascot tradition has always been worked and reworked over the years at UVic. In the past, the school’s representative was simply a man with no mascot suit, ironically called ‘Mother’ Hubbard. The man bore an axe-like prop and ran around entertaining the crowd. Andrus says fans loved Mother Hubbard and his performances.

Playing the role of Thunder is part of UVic’s Work Study Program, which means students are paid to be the centre of enthusiasm. This includes shooting T-shirt guns and hyping crowds. Andrus says hiring students “adds a layer of complications sometimes, because of school schedules,” but he ultimately values student involvement. There are currently five students on the Thunder call list, but the majority of his appearances are enacted by two or three dedicated people.

Andrus said that ultimately, “[Vikes Nation is] trying to get students to have fun through [promoting] an active healthy lifestyle and inclusiveness.” If Thunder’s new toned physique is anything to go by, he obviously agrees.