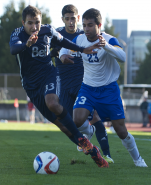 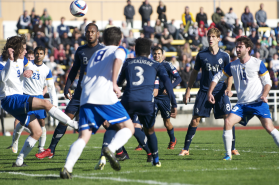 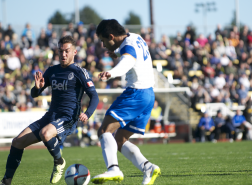 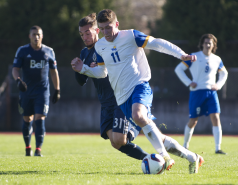 The Vancouver Whitecaps showed their class with a dominant 6-0 win over the UVic Vikes during their fourth annual friendly match on Sunday. The MLS side was expected to win before the match but the Vikes will no doubt be disappointed in the manner in which they lost.

Pedro Morales, Russell Teibert, Octavio Rivero, Marco Bustos, Diego Rodriguez, and Kianz Froese all scored for Vancouver, as the Whitecaps began the game with their starting unit.  The Whitecaps showed little mercy against a tired UVic team, who had returned just the night before from their three-game Floridian tour.

A victory for the Vikes was a longshot after finding themselves 3-0 down in just 20 minutes. The Whitecaps made it 4-0 before the break before compounding UVic’s misery with a fifth and sixth goal. The game wasn’t an exciting, end-to-end match-up, though Whitecaps supporters will no doubt be excited by the ruthlessness their team showed in front of the goal.

Despite playing with a strong lineup, the Vikes got off to the worst possible start when fullback Sam Adekugbe won a free kick for the Whitecaps right by the byline inside the third minute. Morales stepped up to take the kick and curled it inside the near post, with goalkeeper Pawlowski mistakenly thinking the ball was headed wide.

Things didn’t get any better for the home side either when Vikes midfielder Craig Taylor headed Steven Beitashour’s cross straight to the feet of Teibert, the Whitecaps’ midfielder who doubled the MLS side’s lead with a low finish from six yards.

Marco Bustos added the Whitecaps’ third goal, though this time through no error on the Vikes’ behalf. The winger showed an ingenious bit of trickery to flick the ball over the head of centre-back Adam Ravenhill, firing home to extend Vancouver’s comfortable lead.

With the travelling supporters already olé-ing, the Whitecaps added a fourth before the half-hour mark. Morales’ through ball found the run of new signing Rivero whose first shot was saved by Pawlowski, but an unlucky bounce took the ball beyond the UVic goalkeeper.

Misplaced passes were commonplace for most of the first half and with both teams having spent the last few weeks on their respective American tours, their tiredness showed. However, despite their shaky start, the Vikes grew more composed as the game continued.

The Whitecaps were complacent in their comfortable lead and the Vikes started to garner some chances on keeper Paolo Tornaghi’s goal. One corner bounced off the Whitecaps’ bar, and Cam Stokes mis-kicked from eight yards out when it looked certain he would score. Hundal looked bright on the left side, though his best run through Vancouver’s defense ended only in a block from defender Diego Rodriguez.

The Vikes did put the ball in the net before halftime, though Stokes was judged to have been offside before finding Michael Baart to tap in.

It took 10 minutes after the restart for the Whitecaps to add another, with Rodriguez adding Vancouver’s fifth from a Marco Bustos cross.

Manager Carl Robinson made a number of changes in the 63rd minute, with a host of academy and youth players put on the pitch. The Whitecaps looked a lot less fluid with the changes, though they were fluid enough to make it 6-0 after 75 minutes.

Substitute Caleb Clarke’s cross was met well by Kianz Froese, whose powerful header left Pawlowski with no chance as it found the bottom left-hand corner from close range.

The game slowly devolved into a tense, chippy affair, with fouls from both teams replacing any real attempts on goal.

It will be a disappointing result for the Vikes to stomach, although they did very well against a full-strength Whitecaps team for the majority of the match. It wasn’t a flattering score, but the Vikes will know that against any lesser opposition, it would have been a much closer game.