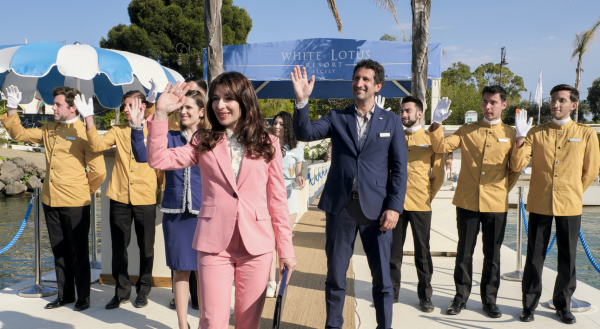 The White Lotus screenshot via IMDb.

As the most bingeable show on air wraps up its second season, it’s the perfect time to catch up on The White Lotus if you haven’t already. The clock is ticking though, as it’s only a matter of time before someone you know accidentally spoils the whole thing.

In 2021, creator Mike White struck gold with the first season of The White Lotus. COVID-19 had taken its full effect on the world of TV at the time. White wrote a perfect pandemic-era show for HBO, having it take place entirely within a Hawaiian resort. The show was released to critical acclaim and won 10 Emmy awards.

Since the first season ended as a complete story, it seemed unsure whether a second season would work or be needed. The new season takes place at a resort in Sicily, with the only connections to the first season being the White Lotus resort branding and one returning character.

The premise is simple: a dead body is found in the ocean by the resort. The timeline then jumps to a week before this discovery, exploring the lives of several different groups on vacation at the same resort. This format leaves you wondering the whole time who exactly is going to die, as the corpse at the beginning is never actually shown.

There are many different storylines, all loosely connected to each other in one way or another. With so many different characters comes endless drama, and not a single dull moment. But, there are never so many characters that the show becomes confusing.

While each storyline and character are entertaining in a different way, Aubrey Plaza’s performance as Harper is incredibly nuanced, cementing her as one of the most talented and entertaining current actors.

The fan-favourite is without a doubt Jennifer Coolidge as Tanya, an oblivious and eccentric multi-millionaire. She is the only actor that was also in the first season.

Nothing in The White Lotus is what it seems. There isn’t a single character that is entirely likeable or hateable — even your absolute favourites will have you questioning their morals.

HBO knows how to create television that is a cut above the rest quality-wise. The writing, music, and acting will make it hard to go back to the stuff that Netflix has been putting out. The cinematography and setting is typical HBO quality, with the scenic shots of Italy’s beautiful coast inspiring anyone wanting to book a flight.

HBO also does not shy away from showing explicit content. Sex is the main theme of this season, and almost every episode has a few scenes that you might not want to watch with your parents.

With seven hour-long episodes, it’s a little too easy to throw on The White Lotus and subsequently spend the entire day glued to your TV. A third season has already been confirmed for The White Lotus, and has left fans wondering what vacation destination will be the next host of HBO’s unexpected smash hit.