Despite my best academic year at university, I had trouble handling pressure and finding motivation to study 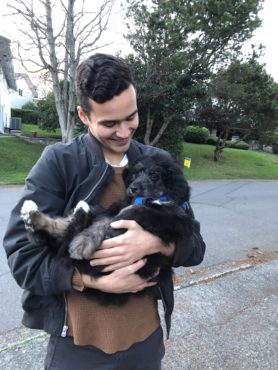 I wanted to drop out, run away, and be anywhere but Victoria.

It was a feeling that had  been brewing inside me for months, since about halfway through first semester, and I felt guilty for allowing the thought to even cross my mind. There are thousands of people across the world who would kill for the chance to go to university.

But I dreamed of taking a year off and exploring the world. Maybe getting lost in the streets of San Francisco for a few months, or feeling the sand between my toes along the beaches of San Diego, or travelling abroad to discover new cultures in southeast Asia.

The school routine of studying and stressing over assignments and tests — which I’ve done for twelve straight years through high school and three more in university — had become stale and repetitive.

Even after my best academic year of classes, and getting straight As for the first time in my life, my dreams of escaping the Island didn’t waver.

I thought the New Year might help me find some motivation and bring back the ‘Old Josh’ — one that was inspired, and determined to do the very best he could in school and athletics.

But the exact opposite happened. To say my 2019 got off on the wrong foot would be a massive understatement.

During the final days of 2018, I battled a nasty flu which resulted in the first fainting episode of my life. After clogging up my sinuses, wrecking the pressure in my ears, and inducing an incredibly painful sore throat, the virus switched its attention to my left eye.

The nerve of that bastard.

For the next four days I was bedridden, dreaming of spending the precious last few days before classes with my family and new 10-week-old Bernedoodle, Theo.

After three years of taking classes at UVic, running and competing for the Vikes varsity cross country and track team, working for the Martlet, writing for the campus blog, and spending weekends washing trucks and delivering linen for Canadian Linen and Uniform Service, I was feeling the effects of burnout.

But instead of playing charades with my mom or cuddling my puppy, I spent New Year’s Eve trying to watch Dick Clark’s New Year’s Rockin’ Eve with Ryan Seacrest through one eye.

On New Year’s day, I was the first one to walk into Shoppers and purchase antibiotic eye drops for pink eye. Yes, I woke up to 2019 with pink eye.

I was starting to feel self-centred and alone. Questions rattled around in my brain during my journey back to Victoria: Why am I thinking of dropping out? Will I make it through the first week of classes? Am I the only one feeling this way?

After three years of taking classes at UVic, running and competing for the Vikes varsity cross country and track team, working for the Martlet, writing for the campus blog, and spending weekends washing trucks and delivering linen for Canadian Linen and Uniform Service, I was feeling the effects of burnout.

In the midst of working her dream job, Lisa M. Gerry, a writer for Forbes, described her bout with burnout as, “multiple chronic stressors over an extended period of time that left me totally drained and no longer performing at my best. In a few short years, I went from bright-eyed and bushy-tailed to seriously burnt-out.”

When I read that, something clicked inside me.

The story seemed to perfectly sum up the feelings I was experiencing. I started university in 2016, and was excited to take every opportunity that was available to me. Write for the campus paper? Sure! Make extra cash on weekends washing trucks? Of course! Post a blog article every month for the university? Why not!

Three years later, however, balancing those extra-curriculars has taken a serious toll on my mental health. I became sluggish, and forced myself to go to class. I put myself down when my running times plateaued in practice, even though I was still recovering from the flu. I wondered if I had lost a step, in the classroom and on the track.

I consider myself a perfectionist, and when I’m not performing at my best in a race or with my writing (I’ve already condemned myself at least three times while writing this piece) my mind goes to a dark place.

That’s when I started to research the effects of burnout online, and, to my surprise, realized that I wasn’t alone.

I learned to listen to my body and take time to rest. Instead of waking up at 5:30 a.m. to finish an article so I could get out the door by 7 a.m. to jog for an hour, I slept in and found time to finish my responsibilities later in the day.

A Sydney Morning Herald study in Australia found one out of five university students will drop out after their first year, and one quarter of Australian teens aged 16-24 will battle some sort of mental health issue over a 12-month period.

There were dozens of other websites online — from university articles to the Huffington Post — describing different ways to avoid burnout.

Although I’ve slowly regained motivation from the assurance of website tips, phone-calls with my parents back home, and getting back into the rhythm of school after a month off, it was the first time I had seriously debated dropping out.

Maybe it was simply a result of post-holiday blues, or maybe I legitimately needed a mental break. Whatever the cause, I learned to listen to my body and take time to rest. Instead of waking up at 5:30 a.m. to finish an article so I could get out the door by 7 a.m. to jog for an hour, I slept in and found time to finish my responsibilities later in the day.

Honestly, I hope I don’t come off as a snob who’s complaining about things many people dream of doing. I want my story instead to help those people who may be experiencing some of the same thoughts that I’ve had.

The UVSS Peer Support Centre is a new drop-in initiative on campus which started in the fall to help students cope with mental health.  There are many other support options available through UVic’s website, such as counselors on campus.

Summer will be here soon enough, and before you know it you’ll be lakeside on the dock dipping your toes in the water and suntanning on the beach. The only thing I ask, however, is that if you decide to plan a trip to San Diego, don’t be afraid to invite me.