Why you should definitely, always put your music on shuffle during sex

Songs to make your sex life, like, really awkward

Some people put on a good album, some people might turn on their favourite radio station, and some people even curate specific playlists—but only the courageous, the gallant, and the brave chance the murky waters of the unabated shuffle while having sex.

And whatever one’s reasoning may be for throwing on Youtube or hitting shuffle on iTunes, the potential for a less-than-smooth song to play is undoubtedly higher with this method than others. 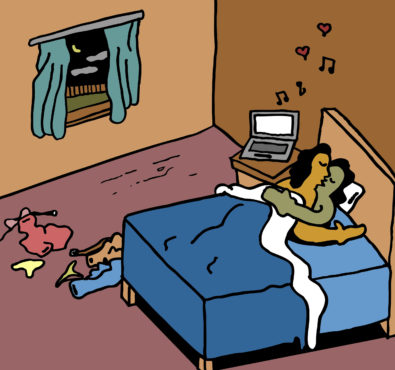 Your sex experience will not look this blissful if you’re listening to these songs. Graphic by Austin Willis, Design Director

I’m sure you’ve heard the horror stories: a song ends, the short silence ensues before Weird Al Yankovic’s “Eat it” comes on.

And unless one’s intention is, in fact, to make things excruciatingly awkward, then there is a possibility that shuffle might just ruin the moment for the two of you (or three, or four, or more — if that’s your thing).

So here at the Martlet we’ve compiled a list (in no particular order) of wonderfully awkward and uncouth songs that might play on your shuffle, all to help you understand just how weird things could get when you leave your sexy soundtrack up to the shuffle gods.

If the semantics of this song alone weren’t enough to turn your sexy bedroom eyes into a regular comedy show, then the image of the ‘90s pop-punk, spiky-haired boy band in crop tops and camo pants certainly will.

I have never met anyone who likes being serenaded by Jack Black.

You might not believe me when I tell you this, but DMX yelling “X gon’ give it to ya! Huh? What?” repeatedly is actually not as sexy as it looks on paper.

Honestly, if this wasn’t an internet meme sensation, it wouldn’t be the worst thing ever. But all I would be able to picture is that meme of Hulk Hogan with a guitar saying “Anyways, brother, here’s Wonderwall.”

The only place this song belongs is in Shrek (and also memes).

The chorus and bridge of this song might be better than any climax anyone will ever have, and you will definitely be too distracted singing along with it to have sex.

While my gang does rock Gucci, I think we can all agree this song was not built for the bedroom.

I’m On A Boat — The Lonely Island

This song would only be appropriate to have sex to if you were, in fact, on a boat.

Never Gonna Give You Up — Rick Astley

This song’s lyrics are about love and loyalty, but like most ‘80s disco, it should be left on the dance floor. Also, Rick Astley’s dance moves will always be more sexy than yours, and this whole article was a Rickroll.