The Sunshine Coast is a hidden B.C. treasure. It boasts a beautiful landscape, a mass of hiking and biking trails and a blossoming music and arts scene. The coast is also home base for hip-hop group, Wilderness Crew. And they packed Lucky Bar on the night of Friday, Nov. 30.. 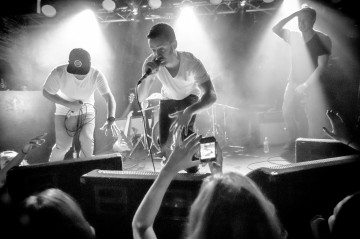 We waited in line as they cleared the bar from the previous show. Shivering, laughing, singing and humming, the lined-up folks were in good spirits. A certain aroma wafted over the queue as the doormen slowly let people in. The sold-out bar was a medley of family members, friends, groupies and fans.

The opening act, Deep Sea Gypsies, kept the crowd bumpin’ in anticipation of the feature act. The Gypsies, with a unique combination of blues/funk and West Coast rap, pumped out catchy tracks until around 11:30 p.m. The crowd stirred and started to get restless.

Wilderness Crew came out with the kind of energy that never faded. The sweat on their foreheads was constant proof of their hard work and passion. They kept the crowd on their toes with a mix of new tracks to accompany their tried-and-tested classics. They busted out hits “I’m Coming Home” and “The Push” off their self-titled first album, and mixed in new songs like “Tell ‘em that it’s good.” 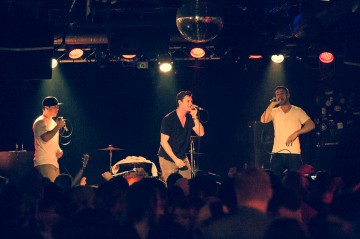 A barefooted Brett Mjanes dominated the stage with his smooth-talking style and laid-back wear. Eli Dill stood out above the rest of the group using his size and voice to keep the crowd energized. The group’s effort level and intensity — above anything else — was what stuck out. Their two-hour set kept the mesmerized crowd engaged and ecstatic.

Near the end of the show, Wilderness Crew invited old pals and ex-bandmates-turned-new-band Mindil Beach Markets on to the stage. The Markets are another band reppin’ the Sunshine Coast. Members of the two bands used to play together until a stylistic breakup was required. Not surprisingly, the two coast bands gelled nicely. Mindil Beach Markets supplied instrumental backup to the West Coast lyrics Wilderness Crew were spitting. 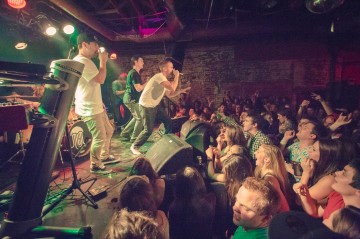 The venue, although cramped and sweaty, provided an intimate setting for the tight-knit hip-hop crew. It didn’t seem to matter if you were at the bar, in the washroom or up in the front row, the Crew’s music filled you ears. With the Gypsies kicking off the night, the Wilderness Crew headlining and the addition of Mindil Beach Markets coming in late, Lucky was served a veritable bevy of B.C. beats.

As the audience stumbled out into the Victoria rain, the night faded away as it had begun: songs being hummed, laughs being had, tales being told and smoke drifting lazily away. The Wilderness Crew put on one hell of a show and we can all hope for their prompt return to the provincial capital.