There’s a certain amount of fear involved when going to the theatre. It’s one of the most ‘live’ forms of art there is — if something goes wrong, there’s no way to hide it. For an audience member, that fear, or that nervous excitement, is what makes theatre so popular.

It’s a fear that’s heightened when you decide to go see a play in a minimum security prison.

“Most often, people respond to that feeling of fear walking in,” says Kathleen Greenfield, UVic alumna and director of William Head Prison’s newest production, Sleeping Giants. “But they turn around and . . . say they were blown away, that it was a powerful experience, and that it made them feel more connected to people who generally live on the outside, on the fringe of society.”

2016 marks the 35th year of William Head on Stage (WHoS), the prison theatre program at William Head Institution, located in Metchosin. The program is the only one of its kind in Canada that allows the general public to come into the prison to watch the productions — though audience members must be 19 years old and above and are reminded not to bring their phones and wallets inside with them. 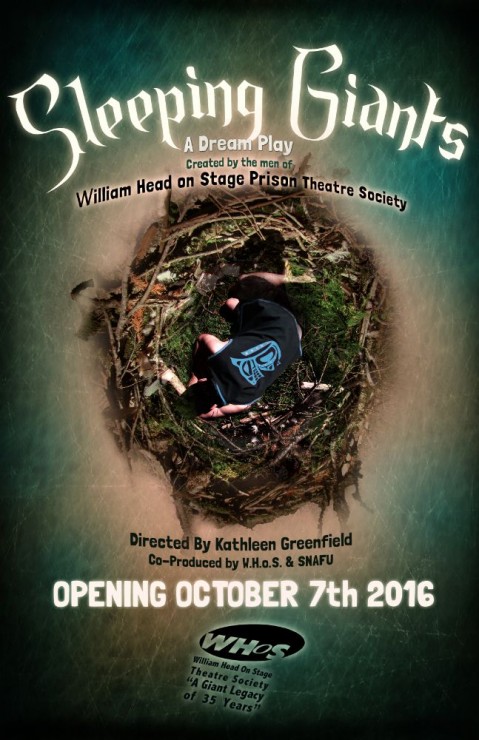 Sleeping Giants — a tale about dreams and technology, incorporating fantastical and spiritual elements — was written by inmates with the direction of Greenfield and other members of SNAFU, a dance-theatre company based in Victoria. It’s the third year in a row that a play written and produced exclusively within the prison has been featured.

This year’s production runs from Oct. 7 to Nov. 5. It’s hosted within the prison gymnasium, which is turned into a theatre for the run of the show, with lights and set pieces more often seen in semi-professional theatre productions.

With audience members sitting just metres away from the performers, there is a level of intimacy that is not often found in a society that prefers to keep its institutionalized members at a distance. And considering the play was written by the inmates, the audience is seeing a performance that has been tailored exactly for them — the public hears what the inmates want to say.

Greenfield, who graduated from UVic’s Theatre program in 2005, first saw a performance at William Head in 2004, and eventually became involved herself in 2013. Working with Ingrid Hansen, a fellow UVic alumna and the choreographer for the production, Greenfield leads acting and writing workshops for the prison inmates through the Prison Arts Collective. For her, the fact that the program endeavours to establish a relationship between the inmates and the audience is what makes the whole thing so appealing.

“A lot of what draws me to the program [is the chance] to essentially break down barriers of perception,” Greenfield says. “It squashes down those misconceptions about inmates in a prison society, and the perceived ideas about how scary or violent [they are].”

“Going through prison . . . there are many messages we get put into our heads that you are inhuman,” says one inmate participant quoted on the WHoS website. “I didn’t realize how deep it went until I was exposed to the community. Oh yes, this is what it is like to be treated like a person.”

Greenfield credits a lot of the intimacy created to theatre itself — an art form that she says is entirely dependent on the relationship that forms between audience and performer.

“The human-performer connection is so key. If we made a film, it would have a wide circulation and thousands of people would see it, but the guys wouldn’t be able to see people seeing it,” Greenfield says. “It’s a living art form . . . without the audience in theatre, theatre doesn’t exist.”

Sleeping Giants is running every Friday and Saturday for the month of October and Nov. 3–5. Tickets are $20, and are available online at ticketrocket.co, or at SNAFU Dance Theatre’s box office at 10-804 Broughton St. Ten per cent of all proceeds go directly to the Help Fill a Dream Foundation. Additional information can be found at whonstage.weebly.com.