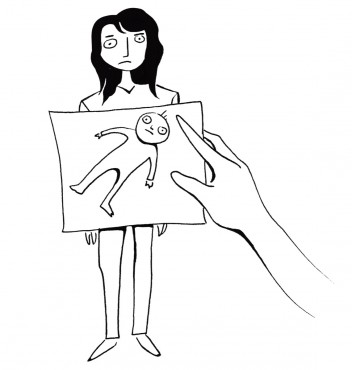 This lifestyle of marriage and children is so ingrained in our culture. Perhaps this fate is changing. The U.S. Center for Disease and Prevention reveal pregnancy rates for U.S. women fell by 12 per cent between 2000 and 2009. Personally, though, I find myself constantly asked about childbearing. During winter vacation, I seemed to be bombarded with questions from the older generation. Not direct questions about babies, but more stories of “So-and-so from your high school just gave birth.” But these anecdotes really mean: “You’re getting married and having children soon right? I’m in desperate need of grandchildren.” I explained that was nice to hear others were happy with children, but that I never plan to have children of my own. Then came the criticism:

“You are too young to know that.”

“You will change your mind.”

“Children are the most precious things in the world.”

A well-placed “That’s so selfish” comment could win the “What Do You Mean You Don’t Want Children” bingo. To say the least, these remarks are rude and condescending. They do not respect that you can think on your own or that your judgement is right. When it comes down to it, the decision to give birth is a personal choice. Unless your parents are going to birth, raise, and pay for a child for the next 18 plus years, they should have no say in the process.

People often wonder if I have any affection for children. Just ask anyone who has taken a bus or ferry with me, as I am often found uncontrollably staring at red-headed toddlers. I feel my hormones go crazy after a kid finally waves back at me, as I realize I have been moving my hand side to side for a freakishly long time.

In fact, I like kids so much that I even worked in childcare for over five years. Through this experience I realized how much shit you have to know and deal with constantly. Children are smart and know how to push buttons, and don’t mind peeing in their pants, or on your pants, or running onto the street just to see your reaction. Eighteen-plus years of this, in addition to paying for their food, clothing, and university? I’d rather have my dream of 10 Golden Retrievers frolicking around on a farm with one derpy pug.

Other women do not want children due to overpopulation or don’t want their bodies to change. But a woman shouldn’t even feel the need to justify wanting a child or not. It is her body, her life, and her choice.