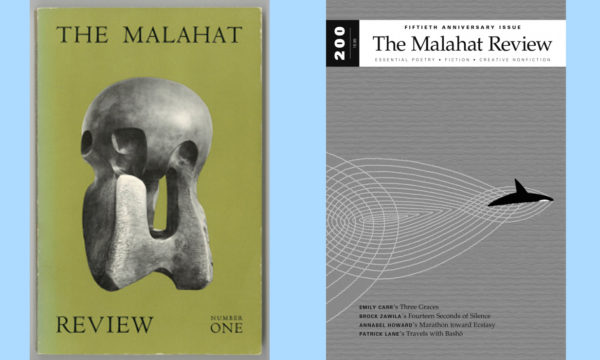 The first and 200th copies of the Malahat Review, which celebrated its 50th anniversary in 2018. Photos provided

Members of the Victoria literary community are holding a meeting to address concerns regarding a UVic decision to restrict the search for the next Malahat Review editor to tenured faculty at the university.

Penned by four Victoria authors, including Yvonne Blomer, Victoria’s poet laureate, a letter detailing these concerns was sent to various writing and reading communities. Further discussion will take place at the meeting, which will be held at the Greater Victoria Public Library on May 10 from 6:30 to 8:30 p.m.

The letter argues that restricting editorship for The Malahat Review, one of the most prestigious literary journals in Canada which has operated out of the university for 50 years, is damaging for the magazine itself and the greater community.

“We are concerned about the editorship becoming essentially a non-paying, internal position (for the next three years, at least),” the letter reads, “[and] the lack of diversity represented in those eligible for the position, the loss of a living wage job for the professional editing and writing community in Canada, [and] the precedent this sets for future funding decisions for the Malahat’s editor position and the magazine itself.”

“That’s what we’re worried about,” said Blomer in a phone interview. “What will the Malahat look like if it becomes slightly less Canadian and more UVic?”

“I think that the community has a right to ask questions and have expectations.”

In two separate but identical emails to the Martlet, Dr. Margaret Cameron, Associate Dean Research in the Faculty of Humanities, and Dr. Micaela Maftei, the current interim editor of The Malahat Review, said the change came after a consultation process with The Malahat Review’s boards, comprised of university faculty and local writers.

“Subsequently, the University Library and the Faculties of Humanities and Fine Arts have been working based on the expressed preference of the boards of The Malahat to run a search process to identify a suitable new editor,” Cameron and Maftei, who sit on the journal’s Advisory and Editorial Board respectively, said. “The search process is ongoing and no decisions about an appointment have been made.”

Cameron also confirmed a university representative would attend the May 10 meeting, and that a compensation package would be provided to whoever the next editor would be.

UVic works with The Malahat Review to publish the magazine four times a year. In addition to contributing around 50 per cent of the journal’s budget, the university supports the journal through internship, work study, and volunteer programs that provide up-and-coming UVic writing students access to the inner workings of a literary journal.

Further discussion will take place at the meeting, which will be held at the Greater Victoria Public Library on May 10 from 6:30 to 8:30 p.m.

John Barton, a UVic alumni, was hired externally as the editor in 2004. He resigned earlier this year, in a decision unrelated to current concerns.

Barton suspects he will be at the May 10 meeting, and he hopes the greater community gets the answers they deserve to the questions they’ve been asking.

“The Malahat Review is a journal that’s been around for 50 years. It’s been at the University of Victoria for the whole of its life,” Barton said. “It belongs to the writing community as much as it belongs to the university.

“I think that the community has a right to ask questions and have expectations.”

An earlier version of this article that misspelled Yvonne Blomer’s name has been fixed. This article has also been updated to correct the fact that John Barton resigned, not retired, from The Malahat Review. We sincerely regret the errors.