Your first UVic Senate meeting Tweetcap of the academic year

The UVic Senate may not be as exciting as the U.S. Senate, but at least they didn’t vote in favour of Kavanaugh 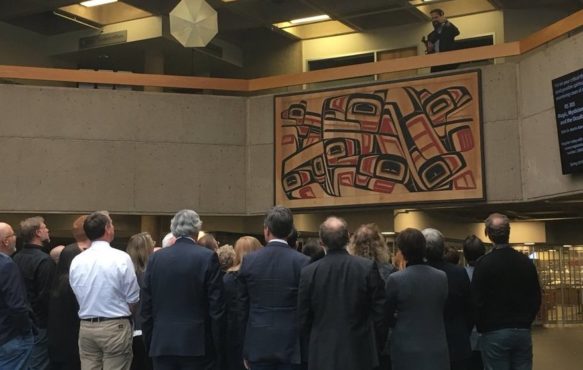 The UVic Senate gathers in the lobby of the University Centre for a group photo. Photo by Emily Fagan, Senior Staff Writer.

Last Friday, while the eyes of the world were on a senate deliberating over the future of the United States Supreme Court, the University of Victoria Senate assembled for their first meeting of the term to discuss posthumous degrees, upcoming projects, and to take a group picture.

The Senate, who is responsible for the university’s academic governance, welcomed several new members—including the acting university secretaries, an acting dean, and student senators.

Out of the 13 student senators, eight were present according to the attendance sheet.

UVic president and Senate chairperson Jamie Cassels started off the meeting with a report that spoke to various initiatives UVic has to look forward to, in addition to accomplishments over the last year.

“It was a strong year,” Cassels said.

"A fair bit has occurred, and a fair bit is occurring," Cassels says as he boots up some slides for his presidential address. Through this presentation, he hopes to bring everyone up to speed.

He mentioned UVic’s Strategic Framework which will be implemented over the next year, and acknowledged areas the university is looking to prioritize such as funding for the Indigenous Legal Lodge program and aging infrastructure.

Also on the horizon is the creation of new student residence housing, which Cassels said will be the largest capital project in UVic’s history.

"We've got a lot of wind in our sails," Cassels says for the second time this afternoon. "So we need to continue to follow through with that."

The first few main motions of the meeting passed without much discussion — the first motion filled positions that had sat vacant since May, and the next two concerned minimum grades for admission requirements.

Sara Beam, Chair of the Senate Committee on Academic Standards, then brought forward a motion to standardize procedures for awarding posthumous degrees, which are awarded on a case-by-case basis to students who pass away prior to finishing their time at UVic.

The reason the process is in place is to reduce confusion and distress for the family, Beam replies. She continues to say that it's best to let them know when everything is formalized.

This process has been loosely implemented since 2004. However, Senator and Associate Professor Rebecca Warburton raised concerns that there have been problems in the past with confidentiality, and said that family members should approve of the degree before the awarding process is complete.

“Victoria is a small town, and these things get out,” Warburton said.

In response, Beam stated that every effort possible is made to maintain confidentiality. The motion passed, with only two votes in opposition.

Up next, the Senate approved new and revised academic awards, after a brief discussion as to whether the definitions of these awards will take into account inclusive language on gender identity and biological sex. Ultimately, it seemed to be that would not be the case for this year, but it was agreed that the subject would be discussed again at another time.

Some of these awards were created in a different time, Annalee Lepp, Senate Committee on Awards, says. Non-binary individuals were not taken into account when determining this language, but it's something to be looked into. The motion passes.

Jamie Cassels says his pen has run out of ink, but that's not holding back the long list of speakers from voicing their opinions on this issue. Most seem to think the policy needs to be reviewed and brought back to the Senate at a later time.

At the end of the meeting, Cassels reminded everyone to stick around for a group photo.

The Senate shuffles over to the main lobby of the University Center for the group picture (which is taken from the highest possible angle in order to capture everyone’s good side) pic.twitter.com/SHbpFbNcPc

The group reconvened in the University Centre lobby and huddled together for the shot, smiling in the face of another year of debate and decisions on UVic academia.

The next Senate meeting will be held on Nov. 2 at 3:30 pm in room C116 of the David Strong Building.