Your Nov. 19 UVSS board meeting Tweetcap 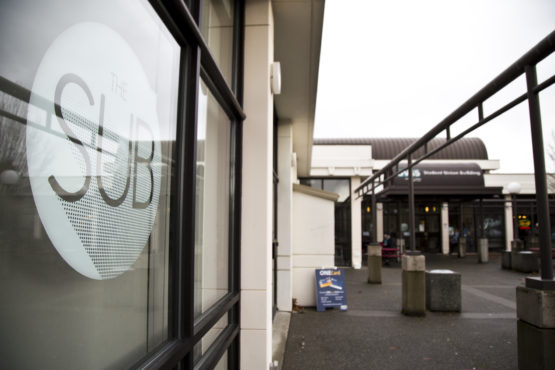 At 6 p.m. on Nov. 19, as the sky darkened and the temperature dropped, the UVSS board members made their way to the Upper Lounge of the Student Union Building (SUB) for hearty discussion and Greek food.

There was much to discuss at this Monday night meeting. But first, Pierre-Paul Angelblazer, Director of Outreach and University Relations, called the meeting to order and gave an acknowledgment of the territories.

After amendments to the agenda were passed, Angelblazer asked if any of the directors and advocacy group representatives had presentations to give.

Isabella Lee, Director of Student Affairs, spoke on behalf of the Feminist Collective, announcing that they would soon be having their Annual General Meeting (AGM) after their new coordinator starts their job.

Emily Stremel, the representative of the Society for Students with a Disability (SSD), announced that the previous chairperson of the SSD stepped down and that they had spent their AGM making changes to their constitution and ironing out inconsistencies in their policies.

In his presentation, Director of Events Noor Chasib announced that another Puppy Playtime will take place on Dec. 4 in the SUB Upper Lounge.

Angelblazer says the Policy Committee is proposing changes to the SUB employee handbook.

During question period, the Martlet had multiple questions for the board.

Chasib was asked about his inclusion of ten push-ups a day in his Director Report — a report stating all the duties the board members have completed since the last board meeting and a tally of how many hours they’ve worked. The Martlet wanted to know if his time spent reaching his push-up goals would be paid for by the UVSS. Chasib responded that he does them in his office on his lunch break.

“I just want the people to know that I stay physically active so I can best serve the community and the students of this fine institution,” he said.

He later clarified that they had been included in his Director Report as a joke.

Question Period! Emily Fagan asks Chasib if his time spent reaching his push-up goals will be paid for by the student union. He says he does them on his lunch break.

The Martlet also asked the board if their proposed changes on the agenda to the UVSS staff party intoxication policy to include cannabis was prompted by a specific incident. UVSS Executive Director Sabrina Studney responded saying that the choice to amend was simply because the previous wording was unclear.

After the question period, Curtis Whittla, Director of Finance and Operations, discussed many motions that he was spearheading.

His first motion involved amending the job description for Chief Electoral Officer (CEO) of the UVSS elections. In addition to their other duties, the CEO will need to responsibly manage the Electoral Office as the previous election, under the supervision of the CEO, went way over budget. The CEO job will be posted soon, says Whittla.

Stremel moves to amend the wording of the required qualifications. They want them to need to have demonstrated experience with planning electoral events.

Stremel's motion is struck as no one is in favour of changing the wording of this requirement. But Whittla's original motion to amend the job requirements passes.

Whittla then moved to make changes to the UVSS employee handbook. He wanted to make the hiring process easier and faster. Now, a big hiring committee will not be required for hiring staff. This motion carried.

Whittla’s next motion was to amend the Electoral Policy, specifically discussing the role of campaign managers and the spending abilities they have. He highlighted in the amended policy that the Board of Directors would now have to approve all Electoral Office budget overruns that exceeded $5 000.

The board of Directors must approve all Electoral Office budget overruns that exceed $5000. Lee asks if board members will be able to vote on this if they are involved in the election. Whittle says it would not be a conflict of interest.

Whittla’s following motion involved amendments to the Electoral Office’s responsibilities. For example, they must produce a handbook of rules and information for the candidates following the close of the nomination period. The handbook must be provided to all the candidates.

Whittla also clarified that the candidates will have to provide their platforms for publication in The Martlet — though this was already in policy, the amendments made the language stronger and clearer.

Whittla’s fifth motion was to amend the intoxication policy for UVSS staff parties in the Employee Handbook, bringing cannabis on par with alcohol at UVSS events.

Any type of substance intoxication at a UVSS event will now incite an emergency response, according to the amended policy. The employee will not be allowed to drive as the “UVSS supports a safe ride home for all employees and their guests,” and will instead be sent home with a designated driver, in a taxi, or on the bus.

“Our stance is for everyone’s safety,” said UVSS Executive Director Sabrina Studney. “We’re not going to be judge and jury of what you might have [taken].”

Whittla’s motions passed quickly and the board moved to in camera, effectively bringing the meeting to an end.

The next UVSS board meeting will take place on Dec. 3 in the SUB Upper Lounge.