Zaharieva gets lifetime supply of Orkambi from Vertex

With others not so lucky, Zaharieva fights on 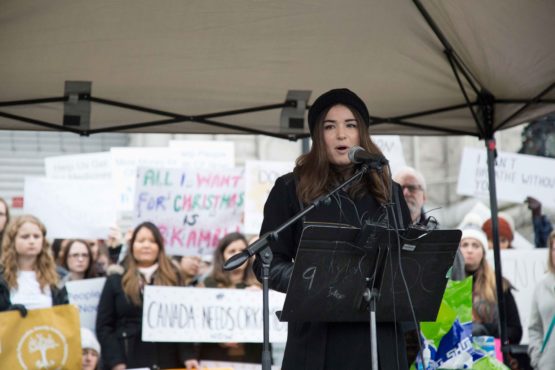 Lilia Zaharieva speaking at a rally at the B.C. Legislature in December. Photo by Belle White, Photo Editor

In August 2017, Lilia Zaharieva was notified that the UVSS would be switching health care plans. As a result, coverage for her cystic fibrosis medication, Orkambi — a drug costing $250 000 dollars a year — would cease.

Zaharieva fought tirelessly to obtain the coverage she so desperately needed. She quickly set her sights on B.C. Health Minister Adrian Dix and spent countless hours imploring him to add Orkambi to the B.C. Fair Pharmacare Drug Formulary.

This has been Zaharieva’s life for the last six months — in constant battle with our provincial government, trying to maintain her health and balance academia, all while running out of her life-saving medication. She had almost given up hope.

That is, until she found out that Vertex, the manufacturer of Orkambi, had granted her a life-long supply of the drug. Zaharieva no longer has to wonder where her next little pink pill will come from.

“My personal journey to Orkambi access is wrapping up the way it began: with an email that left me in disbelief,” Zaharieva said, speaking of the first email from the UVSS and the latest email from Vertex. “After the initial shock, I wanted to call my friends and supporters. I wouldn’t be here without them.”

The victory didn’t come without hardship, though. While Zaharieva has been granted compassionate care, she knows that many others are still suffering. One of those sufferers is Melissa Verleg, from Vernon, B.C. Verleg also suffers from cystic fibrosis and has fought beside Zaharieva in the battle for Orkambi since September.

“I felt a huge wave of guilt knowing that Melissa Verleg in Vernon likely wouldn’t qualify [for compassionate care],” Zaharieva said. “We have been so close in this, and it feels awful to have been granted something that she’s been fighting for and lost.”

This is a momentous moment for Zaharieva, but, with her life handed back to her, she is not giving up the fight for others’ right to Orkambi.

Zaharieva is still raising questions: why was Vertex first to come to her aid, and where was the NDP government when she needed them? As a child of the social welfare system, Zaharieva has been left confused that a pharmaceutical company was more willing to help than the government that facilitated and helped her through her childhood.

Health Minister Adrian Dix has stated numerous times that until Orkambi is approved as part of B.C.’s Fair Pharmacare Drug Formulary, the provincial government would not be covering the cost of the drug. In November 2017, Vertex offered to negotiate a lower price for Orkambi with Dix. Dix ignored the offer, and never met with Vertex. Dix spoke publicly on multiple occasions saying that he wouldn’t budge on the topic, and frequently put the spotlight back on Vertex, pressing them to follow proper approval channels instead.

Zaharieva now feels more motivated and capable of fighting for others’ rights to Orkambi. With a renewed outlook on life, Zaharieva wants to make it clear: “This campaign is not over. It’s moving into a new phase.”