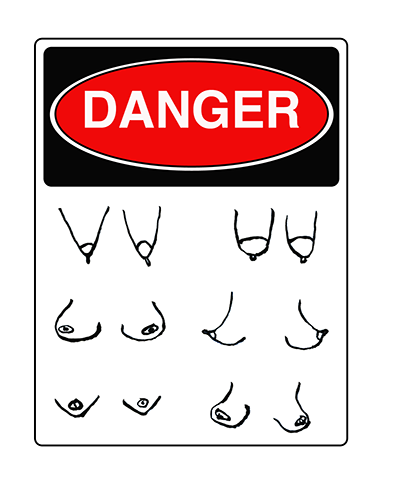 Let’s talk about breasts. Roughly half the people on the planet have them, yet many folks are uncomfortable seeing breasts or even talking about them. Is this fear justified? Absolutely. Breasts are terrifying. I should know; I’ve lived with a pair my whole life, and they still scare me.

Bras are among the most important inventions of all time, and not just because they provide support or help women conform to social expectations. Bras have saved countless lives because breasts are nasty, vicious little monsters. If they’re not safely enclosed in a bra, they’ll bite anyone who gets too close. Only the breasts’ owner is immune to their attacks, and that’s only because breasts are symbionts that depend on their hosts for transportation. When they find a victim, breasts latch on to their prey and suck its blood, swelling up to twice their normal size. The breasts then enter a semi-dormant state until they can digest their meal, which can take up to a month.

Although they are generally hostile to everyone but their hosts, breasts can be taught to accept some strangers. Gynaecologists are particularly adept at calming angry breasts, but this kind of skill takes years of practice and requires incredible natural talent. Usually, breasts will become accustomed to their owner’s close friends, family, and partners, and will refrain from attacking them outright, although they will almost never be truly friendly. However, with careful training, breasts can be taught to cooperate. For example, many actresses can train teach their breasts not to attack their co-workers; otherwise, the rate of breast-related injuries in the film and television industry would be so high that entire genres would disappear.

Of all the common breast behaviors, breastfeeding is the most horrifying. When the breasts’ owner is carrying a baby, the breasts pretend to be docile or even affectionate. As soon as their host becomes complacent, the breasts grab the baby and force-feed it mind-controlling hormones that can make the child grow up to be a feminist. Few people realize that despite what feminists say about equality and respect, feminism was actually created by breasts so that they could get easier access to their prey.

Clearly, breasts are terrifying. It’s a good thing women are required to keep them under control at all times, because otherwise breast-related death tolls would skyrocket, and society would collapse into chaos. Women who go about in public bra-less —or worse yet, topless — are clearly a menace to society.