(According to the patriarchy) 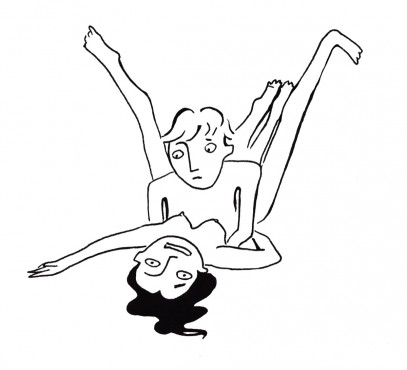 You, too, can have this much fun during sex — but only after a thousand miserable steps and concessions. File graphic by Emily Thiessen

1. Always be excited and ready to have sex whenever your man wants it . . . But don’t have a sex drive of your own

The first step to pleasing your man is to always meet his needs. Studies show that men are simply hornier than women, so sometimes you’re going to have to take one for the team, even if you’re not totally in the mood. You wouldn’t want him to go looking for sex elsewhere, would you?

But remember ladies: don’t be thirsty! No one wants a woman who can’t control herself . . .

2. Always make sure your man gets his orgasm, but don’t worry about getting yours (that’s just a bonus)

When asked why they have sex, men answer “because I want an orgasm” much more often than women do. Plus, an American study found that 95 per cent of men report that they have an orgasm every time they have heterosexual sex. This means that if you’re not getting your man off, you’re doing it wrong, babe.

I know that every girl dreams of finding a guy who can make her reach the “Big O,” but the same study also suggested that this is not that common (only 65 per cent of heterosexual women report it happening), so don’t go around expecting it. Obviously it’s a nice perk if your man is getting you off, but there’s nothing worse than a needy girlfriend, amirite?!

3. Have the skills of someone experienced, but don’t have too much experience (bonus points if you’re a virgin!)

Obviously if you want your boo to think you’re a goddess, you gotta know your way around the bedroom . . . that’s just common sense.

BUT, the key is to gain this knowledge without raising your number. Consistent studies prove that no man wants to wife a girl who sleeps around. So make sure you save your temple just for him!

4. Never get your period . . . You don’t want your man to have to deal with that

I mean COME ON . . . how would you feel if you had to hear all about someone else’s mood swings and cramps, not to mention the river of blood coming out of their vagina?? No one wants a whiny girlfriend, and NO one wants to think about their favourite toy covered in blood!

Protecting your man from the horror scene down there is just common decency, but a true goddess gets rid of it all together. Think about it: what do you expect your man to do without sex during your “time of the month?”

Spoiler: If he’s not getting some from you, you know he’s getting it somewhere else.

One way to take care of this is to change your birth control to one that can stop your period. I know it’s a pain to switch meds, but it’s worth it right?

5. Always, always, always be well groomed. Your man should never know that you grow body hair.

It’s simple: you need to keep your vajayjay clean for your man. How can you expect him to want you if you don’t even take the time to groom yourself? Shaving your pubes is just basic hygiene (for ladies, that is — obviously our hunky men don’t need to worry about this). Different men prefer different hairstyles (bare naked, landing strip, vajazzle etc.), but they all have one thing in common: a minimal amount of hair.