A look behind adventure cats Bolt and Keel 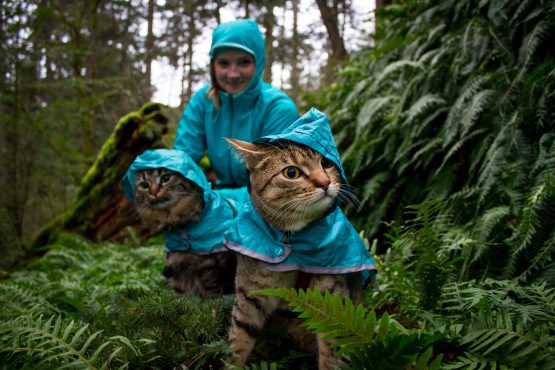 Whether hiking through a rainy forest or sailing on one of Vancouver Island’s many lakes and waterways, Bolt and Keel are always ready for an adventure (and they always look good adventuring, too). Photos provided

Imagine if your pet cats were more famous and successful than you — that’s the reality for Kayleen VanderRee and Danielle Gumbley thanks to their two Instagram famous rescue cats, Bolt and Keel.

The two cats are brothers, found by VanderRee and Gumbley abandoned behind a garbage bin one summer day in 2015. As timing would have it, VanderRee and Gumbley were planning to go on a backpacking trip the next day. Since the shelters were closed and they had no place to leave the two kittens, VanderRee and Gumbley took a risk and decided to bring Bolt and Keel along with them. Since then, the four have gone on numerous outdoor adventures that involve hiking, kayaking, sailing, canoeing, and camping on Vancouver Island and in its surrounding areas.

VanderRee and Gumbley recently released a picture book entitled Bolt and Keel: The Wild Adventures of Two Rescued Cats. It documents the cats’ most memorable adventures with photos first published on their Instagram page.

The book is filled with high-quality photos of the cats adventuring, along with adorably cheesy cat puns and quotes. It is a book that caters perfectly to the internet’s wild obsession with cats and fills a relatively new and niche interest in active and outdoor domestic cats. Currently, a quick search of #adventurecats on Instagram yields about 71,000 tags,  showing that Bolt and Keel are not alone in their feline adventures.

VanderRee and Gumbley have been great friends and “adventure buddies” since they met in 2013. Both enjoy the outdoors, and each named a cat after their respective hobbies. For Gumbley, that hobby is rock climbing — she named Bolt after a climbing bolt. (The name is also appropriate given that Bolt has a kink in his tail that resembles a lightning bolt.) For VanderRee, her hobby is sailing — so she named Keel after the keel of a sailboat. 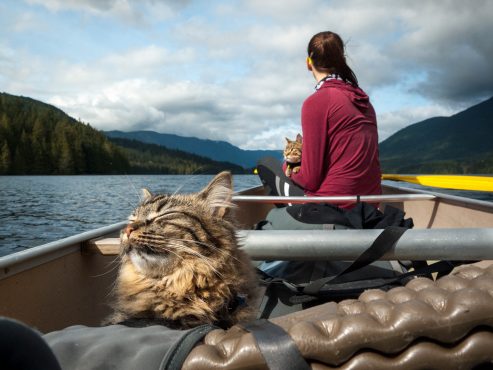 Despite their closeness, each cat still displays its own distinct personality. Bolt is the one who gets carried around the most on their shoulders or in their packs.

“[Bolt is] just really laid-back and easygoing,” says VanderRee. “He’s kind of the bossier one too, so he gets away with being on the higher perch, or he’ll often sit on Keel.”

VanderRee describes Keel as a “great hiker and very energetic . . . He’s hiked the longest distance with us [and] he tends to have a bit more of a personality.

“Keel has some really funny facial expressions ,” she says. “So he’s easy to personify that way.”

In their book, many of the made-up cat quotes are attributed to Keel. “‘That’s one small step for humans, one giant leap for cat-kind.’ — Keel, on Neil Armstrong,” the book reads, printed next to a picture of Gumbley and Keel walking up a snowy mountainside.

VanderRee had just started Bolt and Keel’s Instagram account when it became a full-fledged project for a course at UVic’s English 407 — Social Media and Electronic Communication. She was still a student when the account took off and gained a large following. One of VanderRee’s friends posted a few photos of Bolt and Keel on Reddit and they top-trended overnight.

“The internet loves cats, so it took [on] a life of its own,” says VanderRee. 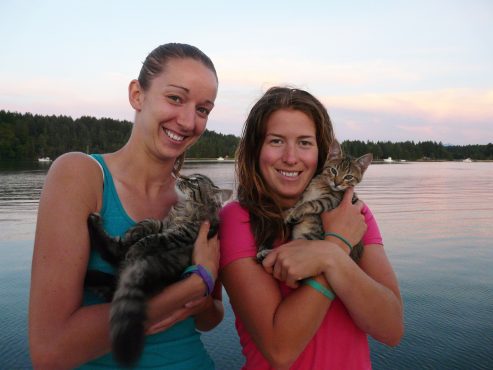 Presently, Bolt and Keel live with Gumbley in Victoria and enjoy an abundance of her snuggles while VanderRee visits often.

The future for Bolt, Keel, VanderRee, and Gumbley looks bright. This winter they are focusing on promoting their book, all while considering canoe trips for next summer. There are no solid plans yet, but they will always leave the possibility of future adventures open.

Bolt and Keel: The Wild Adventures of Two Rescued Cats is now available in hardcover to order online and in many bookstores, including Indigo, Coles, and Chapters