A student newspaper’s job is not to print hate 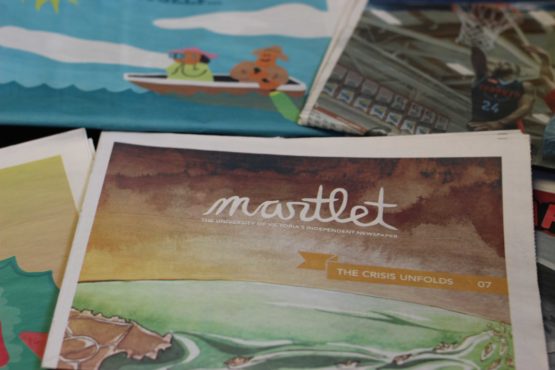 On Jan. 25, the Baron, the student newspaper at the University of New Brunswick’s St. John campus, caused a Canadian media uproar when it published both an unedited interview with and letter to the editor from self-proclaimed “National Socialist” Michael Thurlow. Thurlow and his group took responsibility for putting posters up around the University of New Brunswick Fredericton (UNBF) campus bearing messages decrying multiculturalism and denying the historic harm done to Indigenous people in Canada.

The interview was bland, with questions like, “What did you hope to see achieved by having those posters placed?” and “What has life been like since your party received all of the media attention associated with the UNBF posters?” (Not so much softball as they are T-ball questions.)

The letter to the editor, on the other hand, was pure, unbridled racism. Titled “Sex, Love, and Tomahawks,” the letter was a tired and unoriginal rant about how Indigenous people in Canada were, among other things, “beneficiaries rather than victims of the ‘White Colonization.'”

“I want to see articles go up, people debate and engage with them, and that process of deliberation lead to new articles that then repeat the cycle. IE: Dialogue!” De Luca told Canadaland.

—————
It’s not our job to make sure that students realize that racist people exist — they understand that on their own.
—————

It’s an argument we’ve heard before: how can we argue and defeat a viewpoint if we don’t know what it is? You can’t just ignore a viewpoint you don’t like and pretend it doesn’t exist, people say.

Those kinds of arguments are right in one way only: we can’t ignore these viewpoints. Because they’re already everywhere.

On Jan. 29, the Anti-Defamation League (ADL), an American civil rights organization, published findings that showed instances of white supremacist propaganda on American university campuses had increased by 258 per cent in the past year.

“White supremacists are targeting college campuses like never before,” said ADL CEO Jonathan Greenblatt in a statement. “They see campuses as a fertile recruiting ground, as evident by the unprecedented volume of propagandist activity designed to recruit young people to support their vile ideology.”

This phenomena is not limited to American universities. In November 2017, students and staff at UVic were appalled when racist posters — telling students to “Defend Canadian heritage” — were found on various campus walls.

These viewpoints are unavoidable. We all have Facebook, where any post that mentions Indigenous people in Canada bears essentially the same five racist comments. We have Twitter, where we see footage of White Nationalist rallies in Charlottesville, VA.

We have even had a senator who challenged and questioned just how bad Residential Schools really were.

So when De Luca says she feels justified in publishing yet another batch of racist drivel because it’s allowing us to “debate and engage” with these ideas, I have to ask: where has she been for the past 18 months?

As the Editor-in-Chief of a student newspaper, I know that student journalists (and all journalists) have a responsibility to ensure that readers are making up their own minds by providing contextualized information through fair, objective reporting.

It’s not our job to make sure that students realize that racist people exist — they understand that on their own. They see hate everywhere: online, in classrooms, and pinned to the walls of their university.

Our job is to provide context and a critical eye. We must avoid subjectivity — the kind found in interviews with no challenging questions and diatribes with no reasoned opinions — and focus on truth — the kind found in the voices of marginalized and racialized communities that have been kept silent.

As Greenblatt says, university students are at a time in their lives when they begin to latch on to ideas and really start to believe in causes and movements. This means that student papers have an amazing power.

And as the student media, we have a responsibility to practice the essential qualities of journalism: truth, criticism, and objectivity . And, even more so, we have the obligation to speak up when those qualities are found lacking — especially in other student publications.