A response to the YPY demonstration 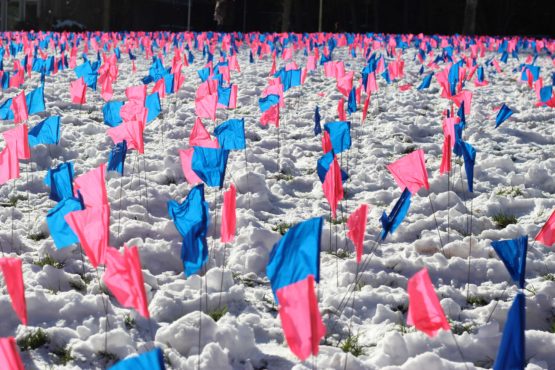 For the second time in only a few months, University of Victoria students are protesting anti-abortion demonstrations on the university campus. Youth Protecting Youth (YPY), a student group whose tagline is “Defending the Dignity of all Human Life,” is once again calling for limitations on access to abortion by decorating the university quad with thousands of pink and blue flags representing abortions in Canada. For the second time, those flags were removed by students who believe in defending a woman’s right to choose.

YPY planted 10 000 flags, each symbolizing ten terminated fetuses per year in Canada. To me, those flags demonstrate that approximately 100 000 Canadian women have access to safe, legal abortion services annually. I see that statistic as something to be proud of.

Since the 1988 R. versus Morgentaler ruling, Canada has been one of the few countries that does not legally restrict abortion. Previously, women had to endure an intimidating process that disregarded their charter right to “life, liberty and security of the person” and denied them agency over their own bodies. Since then, access to safe healthcare facilities that provide abortions has improved nationwide, and court rulings have continually upheld the rights of women. Unfortunately, hospitals and private clinics are not equally accessible in all parts of Canada and coverage has provincial variations. Nonetheless, pro-choice activists continue to push forwards.

What anti-abortionists need to understand is that their moral values do not give them the right to interfere with the private choices of others, especially when this moral code is imposed at the expense of women’s health and lives.

Unlike women in many other countries, women in Canada do not need to state a reason to terminate an unwanted pregnancy in the early stages. Late-stage abortions can be obtained for medical reasons, such as physical malformations and genetic mutations in the fetus, or because the health of the mother demands it. The rights of the woman cannot be overridden by any alleged rights of the fetus, because according to the Canadian criminal code, a fetus is not a human being until it is born. This ensures that none of the thousands of women who seek abortions every year are forced to suffer pregnancy and childbirth against their will. Canada’s lack of abortion regulation protects the right of women to make their own decisions in regard to their own bodies.

YPY does not want to universally deny women access to abortions, setting it apart from other pro-life organizations. They claim to only want legislation that regulates abortion, evidenced by their hashtag #WeNeedALaw. However, there is no sliding scale when it comes to choice, so this minor difference is irrelevant. Pro-life is anti-choice. Either women have the right to choose or they do not.

Both criminalization and regulation of abortion pose a threat not only to women’s rights, but to women’s health. If Canada enacts regulations, some of the women denied access to safe abortions will seek alternative measures at physical and legal risk. The phrase “coat hanger abortion” exists for a reason.  Women have found ways to terminate pregnancies for centuries, regardless of the procedure’s legal status. These methods can be dangerous and in countries with anti-abortion laws, many women die or face jail time. In El Salvador, where abortion is illegal, methods of self-inflicted abortion include ingesting poison and thrusting knitting needles into the cervix. If discovered, these girls and women are imprisoned for homicide.

It is important to note that risky or brutal methods of self-induced miscarriage are not exclusive to the developing world. This is a reality in all nations that deny women access to sex education, contraception, and abortion services.

To me, those flags demonstrate that approximately 100 000 Canadian women have access to safe, legal abortion services annually. I see that statistic as something to be proud of.

According to the World Health Organization, approximately 25 million unsafe abortions occur every year worldwide, resulting in 7 million complications. The situation is far more dire in developing parts of the world, but even in developed nations, 30 women die for every 100 000 unsafe abortions performed. Safe abortions, like those legally performed within Canada’s healthcare system, could prevent nearly all of these deaths. Fortunately, since safe drugs are easier to obtain now than in the past, fewer women are forced to resort to back alley abortions even when the procedure is regulated or criminalized. However, women forced to access these drugs illegally face sanctions.

What anti-abortionists need to understand is that their moral values do not give them the right to interfere with the private choices of others, especially when this moral code is imposed at the expense of women’s health and lives. The problem is not the personal beliefs of pro-lifers. The problem is their perceived moral obligation to impose these beliefs on others.  The medical or personal reasons behind a woman’s choice to obtain an abortion is not the business of anyone but the woman and her healthcare provider. The right to abortion guaranteed in 1988 must be inalienable because no woman should feel coerced, shamed, or driven to self-harm.

Clearly, YPY members would not choose abortions for themselves. That is their choice as individuals, and I respect that. I also believe that is as far as their influence on the matter should stretch. Other women’s bodies and healthcare choices should not be their concern. This is why I, on behalf of myself and all other pro-choice women, hereby respectfully request that YPY keep its opinion out of my uterus.