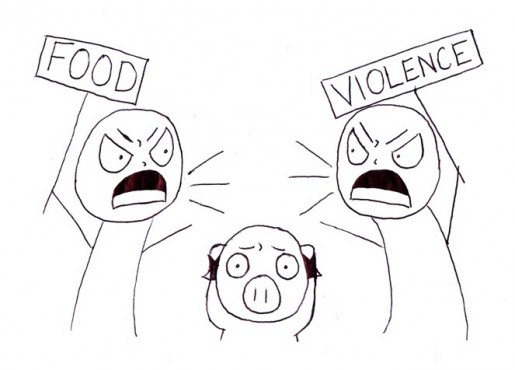 On Saturday Nov. 22, protesters associated with the animal rights activist organization Direct Action Everywhere (DxE) staged a demonstration inside and outside of Pig BBQ Joint in downtown Victoria. They held signs saying, “It’s not food, it’s violence,” and loudly asserted to customers that “what’s being served in this business is not food, it’s bodies.”

The following Tuesday, a group led by local chef Morgan Onda bought lunch at Pig in a show of solidarity with the restaurant. Their response was a simple reversal of the protesters’ slogan, signs that read “It’s not violence, it’s food.”

There is a legitimate debate over whether meat should be considered a basic food resource or a luxury. On the extreme end, those opposed to meat as a resource want to grant additional rights to non-human animals, comparable to the rights we have formulated for ourselves. Whatever people believe about animal rights, there is also plenty of weight to both sides of the argument over whether humans, being omnivorous creatures, should continue to include other animals in their diet when vegetarian options exist throughout most of the modern world.

However, the value of ethical practices at all stages of meat production is far less ambiguous. Most would agree that corporate profit at the expense of causing senseless suffering in animals is wrong; one need only concede that animals can experience pain, and then take steps to prevent the same kind of excruciating deaths that they would meet in the wild.

It seems reasonable that ethical meat production should actually allow livestock to have less painful lives and deaths than they would have in nature. Under natural conditions, prey animals generally either die of illness or old age with no palliative care or mercy whatsoever, or they fall into the rending claws and teeth of carnivores and omnivores less conscientious than humans. Humans are unique in the animal kingdom for our ability, at our best, to minimize the discomfort of whatever we kill. The only comparison I can think of is to the few predators whose venom happens to include an anaesthetic effect. By nature’s standards, we can be remarkably kind to our prey.

It is strange that DxE chose to hold their demonstration at a local business that sources its meat from federally approved plants. Why not choose a more egregious example of cruel industrial practices, like one of the major fast food chains? Was it simply that the restaurant’s straightforward name, Pig, would garner more attention? Did they think that the restaurant’s patrons might be from demographics more inclined to change their minds on the meat issue in response to a debate?

Why, then, did they resort to shouting slogans rather than engaging the customers in conversation or handing out informative literature? Does DxE consider it worthwhile to treat human beings with respect, during their efforts to convince humans to treat other animals with respect? At the very least, treating humans well is just as important as treating other animals well, if one believes that humans are at all similar to other animals.

In order to respect any animal, one must provide a certain amount of physical and emotional comfort, but our species has a fundamental need for something more: intellectual integrity, the comfort of the truth. We like to communicate. We like to ask—and be asked—questions. I would challenge DxE and those like them to ask rational questions and satisfy others with more cogent responses, even if what mostly gets them noticed is their voices raised in anger. For example, they could write to the Martlet.