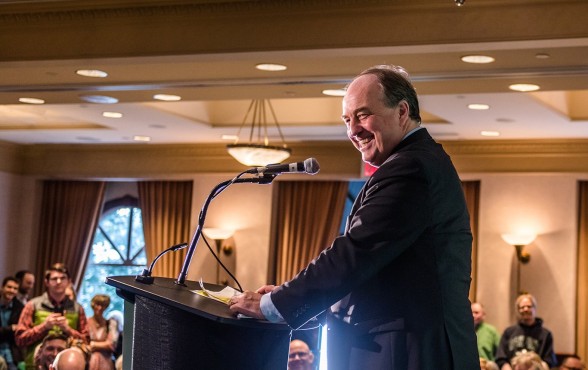 Now several months beyond the May 9 B.C. provincial election, we finally have a new leader — or leaders — governing our province.

On July 18, B.C. NDP leader John Horgan was officially sworn in as British Columbia’s 36th Premier, the result of an agreement with Andrew Weaver’s B.C. Green Party to form a coalition government. Together, the NDP and Green parties hold a razor-thin minority government of 44 combined seats, to the B.C. Liberals’ 43 in the 87-seat legislature.

A few weeks earlier, after the NDP and Green parties first agreed to lead a minority government, the Canadian Press published a photo of Horgan and Weaver smiling while watching a rugby game. The party leaders, both of whom were avid rugby players in their past, seemed to be committed to forming a perfectly harmonious duo.

However, the two have differing opinions on many hot-button issues like economic policies, the Site C Dam, tolls, and the housing crisis; and wounds from the campaign trail may also be slow to heal, after cutthroat declarations were made from two party leaders now working together.

“Your plan is simply ‘La La Land’ plan,” Weaver said about Horgan’s economic plan, which includes raising the minimum wage to $15 per hour, during a debate in late April.

The Greens campaigned strongly against the need for the Site C Dam on the Peace River — “I’ve been pointing out for several years now that Site C is the wrong project at the wrong time,” Weaver said in a debate in the B.C. parliament — but the NDP, a party built on a reputation for supporting the union worker, could be opposed to cutting jobs for workers in that area of the province.

Transportation is a sticking point as well. Horgan promised to eliminate tolls on the Port Mann and Golden Ears bridges, but this conflicts with Weaver’s campaign promise to support the Mayors’ Council 10-Year Metro Vancouver Transportation Plan, which includes tolling people for using certain road networks.

In Mike Hager’s Globe and Mail article titled “Friction points ahead for B.C.’s NDP-Green alliance,” Hager explores how Weaver may manage this situation. In particular, Hager relies on insights made by UVic political scientist Michael Prince. Hager writes that Prince “said Mr. Weaver might seize this issue to criticize the NDP’s promise to outlaw tolls . . . which [Prince] called ‘election goodies’ used by the Liberals and New Democrats.”

The housing crisis is another point of contention between the parties. The NDP party has said they would introduce a 2 per cent speculation tax on properties in the Lower Mainland, while the Greens proposed a 30 per cent foreign-buyers tax (doubled from a 15 per cent tax the Liberals introduced last year).

In addition to policy differences, Horgan’s temperament issues may see him and Weaver struggle to see eye to eye. 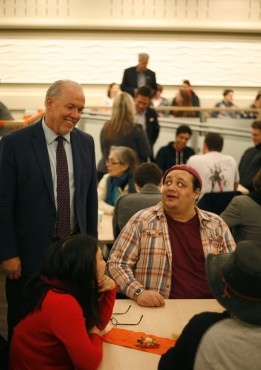 Leader of the BC NDP, John Horgan. Photo by Belle White

Weaver has openly criticized Horgan in the past — look no further than the “La La Land” quote above — meanwhile, Horgan is known for being a ‘hot-head,’ and losing his cool in key moments when matters do not go his way.

When annoyed with how B.C. Liberal leader Christy Clark was interrupting him in a radio debate, Horgan referred to Clark’s affinity for photo-ops and said, “if you want to just keep doing your thing, I will watch you for a while; I know you like that.”

His outburst was hypocritical — with CTV News Vancouver pointing out that Horgan interrupted Clark much more whenever the former premier started to pick apart his platform.

How can Horgan be expected to have open dialogue on points of disagreement with Weaver, the man who agreed to put him in the Premier’s office, with his notorious short fuse?

In his Globe article, Hager discusses the dividing points between the two parties.

“Both parties must put aside the personal and political differences on display during a sometimes testy election campaign,” Hager writes. “And pundits — not to mention the B.C. Liberals, who will soon find themselves in the opposition after 16 years in power — will be waiting to jump on the smallest crack in the nascent partnership.”

Horgan and Weaver were all smiles while watching a simple rugby match together from the sidelines; however, if they begin to argue about key issues, don’t be surprised to see action more fitting for a rugby pitch.