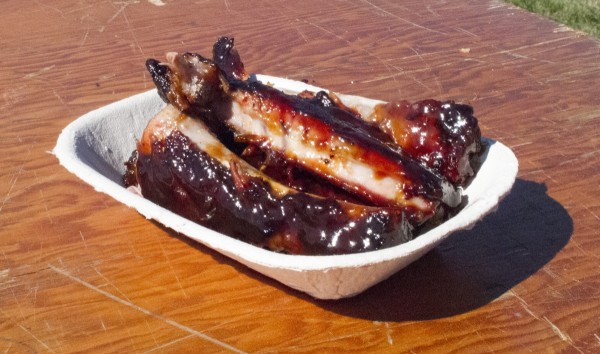 As the 15x dropped me a very short walk around Country Grocer, the smell of mesquite smoke and grilled pork began to dominate the air around Bullen Park in Esquimalt. For any size donation, one can enjoy the competition as five great ribbers vie for the public’s votes on who will be the people’s favorite (only samples for free however, a minimum of $9 to dive into a ⅓ rack.)

According to Tom Woods, the organizer of RibFest, the admission by donation helped raise $15,000 last year for recipients like the Esquimalt Rugby Academy, Rockheights Hockey, and elementary swimming. Rugby and ribs, it seemed, were his priorities.

Judging from the samples, Boss Hog’s certainly has the sweetest sauce. Smoke & Bones (no connection to the former Victoria restaurant) gave the most generous sample, but I tried Prairie Smoke & Spice’s 1/3 rack based on a sample of their brisket. Maybe that was a mistake, but I thought if they could get close to their flavour there it would be a winner. The spicy and smoky flavours, while good, weren’t as strong as I would have hoped. I also like a little more bark on my ribs, but what was there was a nice dark candy caramel of meaty goodness; I’d give it 4/5 as my expectations weren’t quite met. The wasps liked it, too, so if one is allergic, bring an EpiPen.

Non-meat options from local food truck A Streetcar Named New Orleans include a corn maque choux, simmered okra, or white beans with rice. They were just getting going when I hit the fest, but their good reputation for Southern style cooking should stand them in good stead next to the meat-a-thon. Also new this year was corn from Silver Rill at the Esquimalt Lions tent for $2.25.

Woods is confident that with the weather and press, a 3rd annual Ribfest will definitely go ahead.

The 2nd Annual Esquimalt RibFest is at Bullen Park, Esquimalt from Sept. 12-14 from 11 a.m. – 10 p.m., (but the show ends Sunday at 9 p.m.). The local music lineup includes the headlining Beatles cover band, The Sutcliffes. For more information, go to their website.