The small, seaside town of Garopaba has a magnetic pull for the descendants of Gauderio, a knife-wielding “gaucho” that the town murdered, according to family lore. Melding poetic language with prophetic mystery and a heavy dose of mythic ambience, Daniel Galera’s Blood-Drenched Beard delves into the intrigue and isolation of two nameless men as they grapple with the inexplicable deaths of their enigmatic forebearers. 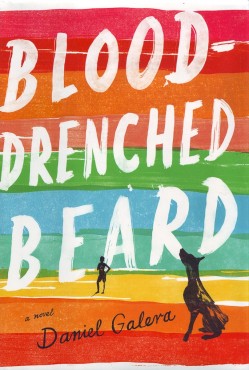 Recognized by critics as one of Brazil’s most influential young writers, Galera has published four novels and a short story collection, and has translated writings by distinguished authors such as Zadie Smith, David Foster Wallace, and David Mitchell into Portuguese. He is also the co-founder of Livros do Mal, an influential publishing house. Blood-Drenched Beard is his most recent novel, and the first to be published in English.

The Canadian edition of his novel, translated by Alison Entrekin, brims with concrete, lyric language, enthralling characters and settings, and insightful observations on life, love, and isolation. The use of setting is particularly enchanting, and the relationship between the nameless protagonist and his father’s dog creates a unique and emotionally resonant thread that ties the ambling, at times disjointed, narrative together.

Though ripe with the potential for high-stakes action, Blood-Drenched Beard maintains a steady, ruminative pace that doesn’t quite provide the thrill that the premise portends. Reading the description, it is easy to imagine that Galera’s novel will deliver non-stop action and a mystery that clearly guides the narrative; however, in execution, the story provides something entirely different in tone, while still hitting all the main selling points in subtle, unexpected ways.

At its core, Blood-Drenched Beard is a story of spiritual heritage, examining the emotional and physical scars that loved ones leave behind and the alacrity with which people isolate themselves to chase family legends. Galera’s story is at once filled with physical immediacy and with the slow burn of emotional understanding, stunted and at times misunderstood, but always moving through the slow process of interpretation.

Blood-Drenched Beard provides an exciting opportunity to enter the world of Brazilian literature in English, and has a tremendous arsenal of delights to offer booklovers of all kinds. Galera’s use of structure, language, setting, point of view, and character all coalesce to create a rich and engaging story that is at once entertaining and unfathomable. Don’t let the description fool you; this is more than your average mystery, action, or drama novel, and if you go into it looking for something simple, you may not be satisfied with the gems that you find.