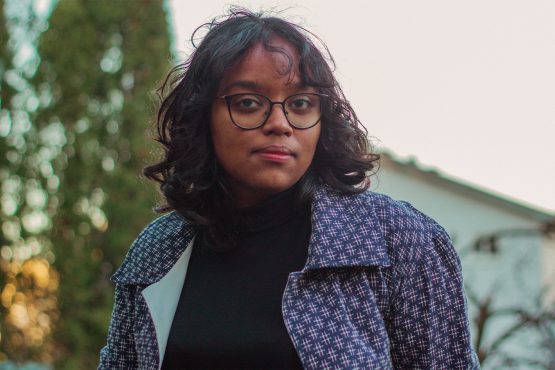 It’s 9 p.m. on a dreary November evening. Rachel Lachmansingh, a fourth-year creative writing student, has just finished reading Orange by Alexander Theroux. Laughing to herself, she realizes that this essay, essentially a mundane description of colour, has inspired her to write.

“I thought I wasn’t as much of a nerd when it comes to language,” said Lachmansingh, reflecting on Theroux’s essay. “But here I am sitting on my couch at 9 p.m. reading a book about the colour orange and I’m getting so excited about somebody describing a colour in this way.”

For Lachmansingh, inspiration tends to randomly materialize like this. Whether heating up a cup of tea or lounging on the couch, when she feels that impulse, she pursues it. “I try to follow those little pathways because they always lead me somewhere interesting with my fiction,” she said. “Otherwise, it’s all about reading. For me, poetry actually really inspires my prose in an intangible way.”

Before pursuing UVic’s creative writing program, she had never considered writing poetry. Now, she writes at least one poem biweekly, on top of two fiction pieces each semester. Throughout her degree, Lachmansingh has explored every form of writing, from novels, to short fiction, to poetry. Her short fiction has appeared in several publications and, just last month, her poem, From the Mouth, was shortlisted for CBC’s annual Poetry Prize.

Despite an extensive list of awards to her name, as a writer, Lachmansingh is no stranger to rejection. In fact, it took several months before The Party, one of her favourite pieces, was finally published. The story itself, conceived on a whim of intuition, came together in about 30 minutes. “I was following [that impulse],” said Lachmansingh. “I remember writing it very very vividly and I started submitting it, but I just kept getting rejected.”

Once rejection letters began multiplying in her mailbox, Lachmansingh briefly considered dropping the story. However, after re-reading it, she changed her mind. “I loved it so much and I realized, no, I believe in this draft,” recalled Lachmansingh. “I’m going to submit this draft and I’m not going to stop submitting it until it gets somewhere.”

The Party eventually appeared in the 220th issue of The Malahat Review, a literary magazine published by UVic. For Lachmansingh, this experience was a valuable lesson in perseverance, reminding her that rejection, however personal it may seem, means nothing. “Getting those rejections can be tough,” she said “But it doesn’t mean anything about you as a writer and now, I find it exciting to look back at my submissions for the year and see how many rejections I got.”

In 2022, Lachmansingh was rejected around 20 times. However, rather than let others’ opinions get her down, she keeps writing, knowing how important it is to value her own desires over others’. “As writers, [we’re] going to have so much time to hear the voices of other people,” she said. “There’s a certain strength, I think, that comes with being able to prioritize your voice first.”

Still, at times, Lachmansingh has found it hard to balance her personal priorities with school. With one more semester left before the end of her degree, she’s finally achieved an equilibrium between writing for others and writing for herself.

According to Lachmansingh, this balance — between your own voice and others; academic work and personal — is essential to developing as a writer. “The most important work for me is the work that I wrote just for my eyes alone. It’s the work that I cherish the most,” said Lachmansingh. “I’ve spent a lot of time, as an artist, doubting my instincts … Sometimes it’s nice to just know that you can rely on yourself.”