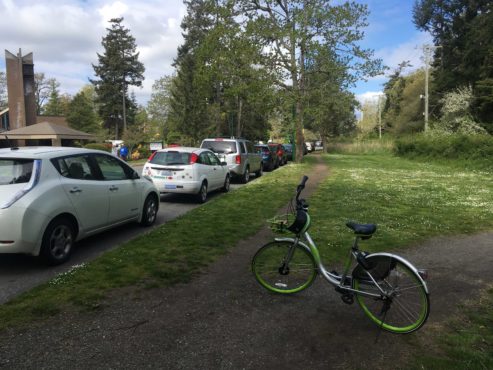 One of the lime-green U-bikes, found all around Victoria. Photo by Cormac O’Brien, Editor-in-Chief

If you have been on campus lately, you will have likely noticed it’s not only herds of deer or bunnies that you need to watch out for — instead, a plethora of lime-green bicycles have become a new daunting obstacle.

The bikes, created by the China-based company U-bicycle, were brought to Victoria in the fall. But with the recent stretch of summer-like weather this spring, the bikes have appeared on campus in waves.

U-bicycle North America was launched in Vancouver in 2017 by Simon Fraser alumni Grace Min, and the company takes pride in being the first stationless bike sharing platform in Western Canada.

“We could not be more thrilled to launch in Victoria as our first North American location,” CEO Min said in a September press release when the bikes were first distributed. “This is a big step and milestone for U-bicycle as we get ready to disrupt the bike-sharing market across Canada and the United States.”

Victoria Mayor Lisa Helps echoed that sentiment in a statement to the press back in the fall.

“We met Grace on our mission to China last fall,” Mayor Helps said, crediting that as the reason Min chose Victoria as the first North American city to distribute U-bikes ahead of other cities such as Austin, Texas.

“Victorians have been waiting for this bike-share for sometime; U-bike is a welcome addition to Victoria’s sustainable mobility options.”

Unlike other bike sharing platforms in Canada, such as Mobi or SoBi, U-bikes aren’t paired with docking stations. To gain access to the bikes, users scan the barcode key located near the rear tire with an app on their phones to unlock the tires and begin riding.

“You ride to wherever you’re going and you just lock it up anywhere legal and you go from there,” said Mayor Helps. “If all the bikes congregate in one place or if they all end up at UVic or wherever, the company then redistributes them back in Victoria.”

From there riders can download the U-bike app on their phone, and use a GPS locating system to find and pick up a bike from almost anywhere: on the side of the road, in the middle of a parking lot, or even near Mystic Vale or the Alumni Chip trail.

“You ride to wherever you’re going and you just lock it up anywhere legal and you go from there,” said Mayor Helps. “If all the bikes congregate in one place or if they all end up at UVic or wherever, the company then redistributes them back in Victoria.”

However, some citizens have called this dockless style of bike sharing a “plague” and demanded stricter action to enforce spots where the bikes can be dropped off.

In China, where the dockless bike share revolution started and transformed into a billion-dollar industry, Shanghai-based blogger Marc Milian is one of the strongest critics of the movement.

“Nice photo, will [sic] all the bikes in a suitable parking place. A pity it will not it will not last more than a day. They are a plague,” Milian tweeted in response to a photo showing neat rows of the bikes, sharing his own photos of dockless bikes left haphazardly on top of each other on various sidewalks.

But not everyone seems dismayed at the dockless system. Just last year, Ofo, a similar Chinese bike share company, expanded to Seattle and saw few issues with bikes being left idle.

There are 3 000 dockless bikes in the streets of Seattle, and users in the Emerald City haven’t noticed a pileup of bikes in parking lots across town.

“Almost all the bikes are parked out if the way, more or less properly, and if they aren’t someone will just come and move them out of the way,” said Tom Fucoloro, editor of the Seattle Bike Blog in a recent Washington Post article.

“Seattle’s kind of a rule-following town in that way and that’s how it’s playing out with the bikes.”

UVic doesn’t have a specific policy regarding the maintenance of U-bikes on campus, and whether students will face repercussions for discarding a bicycle likely depends on where they leave it.

Keith Cascon, Director of Campus Security, said if security officials on campus saw a U-bike placed somewhere other than a bike rack that they would move it to one. If he noticed an increase of bikes left in fields or trails, Cascon said he would call U-bicycle directly.

“If it became a continuous problem I’d call that company, and advise them that these bikes need to be left at bike racks so they’re not left out in the middle of the field [or] that it’s subject to vandalism,” said Cascon over the phone.

“It would be complaint driven, but if we saw it in a obvious place where it’s gonna draw attention or cause problems, we probably just move it to a bike rack. I don’t think we’d get to the point where we’d remove it from campus.”

When contacted by the Martlet, Director of Campus Planning and Sustainability Mike Wilson stated that the university is in the midst of looking into the management of U-bicycles on campus, and asked for a follow-up to the matter in late July.

Wilson also mentioned UVic is currently designing their own cycling plan, which will be used as a guide to future bike-related issues on campus.

In the meantime, students will have to keep their eyes open for both moving cyclists speeding across campus and parked U-bikes idly sitting in the quad.