Crow’s low blows anything but highbrow 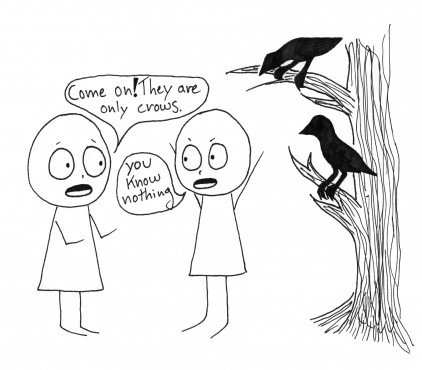 Have you or a loved one ever been attacked by a crow? Don’t laugh. This is serious. I mean a full on, Hitchcockian dive-bomb attack? I have not, but my grandmother has.

“There were three of them, and they were working together,” says my grandma Connie. The crows bombarded her near Gonzales Park down by the water, and Connie hasn’t gone back since. “They ganged up on me. They wait until they have you where they want you, and then they swarm.”

When she told me this story, I only had one question: what did these crows have against my grandma? Why are they so angry? And what had my grandma done to provoke this response? My instinct is to blame the crows as my grandma isn’t the type to walk the streets swearing at fowls. I mean, crows generally get a bad rap. Don’t forget that a group of crows is called a murder. A murder of crows. To whomever came up with this collective noun, congratulations, the crows are living up to their name.

Let’s go over some chilling facts about crows:

1. They can remember your face.

3. They conspire with one another.

To summarize, once a crow remembers your face, they will tell their crow friends and crow children about you and remember you for future attacks. Got that? Remembers your face. Tells all crow relatives. NEVER FORGETS.

After doing some research, I found that these terrifying attacks are in order to protect their nests and babies. Crows, I get it. You’re protective of your nest. If someone interrupts me watching Gilmore Girls on Netflix in my bed one too many times, I get a little agitated myself. True, I don’t have a baby to protect, but if I did and thought a grey-haired granny was a threat to my child, I might attack her. But crows, if you’re reading this (because I’m assuming you’ve taught yourself to read by now), please understand: the people of Victoria do not want your crow babies.

But what if it’s something more than that? Is it something someone said in passing? Some angered crow remark that felt unfair? That’s understandable. You’re portrayed as spooky, Halloween decor, murderous beasts. You’re smart; that much is clear. You know you’re the Hollywood symbol of creepy-ville, and you’re probably sick of it. Well, I think it’s high time the people of Victoria extend an olive branch, or at least something shiny, and open up a dialogue about our treatment of crows in the media. And on your behalf, crows, could you please stop assaulting my grandma? That’s just uncalled for, and Connie won’t stand for it.