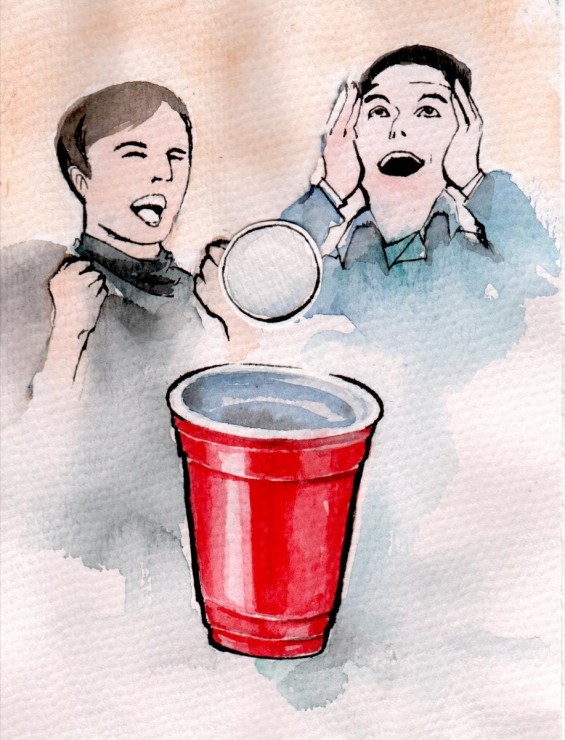 Lily Li via The Peak (graphic)

This story was originally published in The Peak, SFU’s student newspaper.

HUMOUR — In a move that could very well change the way in which humans deal with sanitation and sterilization, attendees of a Tight and Bright party last week have discovered the most efficient, fast-acting way of killing nearly every trace of bacteria on a surface: a red Solo Cup filled with lukewarm water from the tap.

“We were setting up cups for a game of beer pong when someone asked for an extra cup,” Tiffany Marsh said, recounting the extraordinary events leading up to the discovery. “He said he wanted to use a rinse cup for the ball, since the table was pretty gnarly from the game before us. Also, I think someone had puked on it earlier.”

Once the game was officially underway, the ping-pong ball repeatedly bounced off the table onto the beer-crusted floor underneath, and even into a nearby fern plant. Marsh was sure the ball would never be fit to be sunk into cups of beer again.

“Each time one of us missed the table, I thought to myself, ‘That’s it. That ball is done for.’”

“Now I know how Thomas Edison must have felt after inventing the light bulb,” Marsh said, though likely downplaying the moment’s importance.

While the discovery’s scope is limited at this time, it’s possible that Solo Cups of water will have a dramatic impact on the way hospitals sterilize tools and environments; the food hospitality industry is also speculated to undergo changes in how sanitation standards are upheld. Even the recent Ebola epidemic—the largest in history—could become a testing ground for the new disinfecting method.

“It’s unclear at this time what effect this new super sanitizing agent might have in the current outbreak,” said Tim Riggins, spokesperson for the World Health Organization, “but one thing is for certain: whoever’s bright idea it was to use a cup full of water to supposedly clean off a ping-pong ball while playing a drinking game, deserves a medal. Reeeeeally good job on that one.”